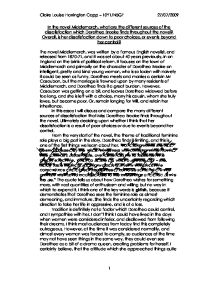 In the novel Middlemarch, what are the different sources of the dissatisfaction which Dorothea Brooke finds throughout the novel? Overall, is her dissatisfaction down to poor choices, or events beyond her control? The novel Middlemarch, was written by a famous English novelist, and released from 1870-71, and it was set about 40 years previously, in an England on the brink of political reform. It focuses on the town of Middlemarch and primarily on the character of Dorothea Brooke an intelligent, pretty and kind young woman, who is so laden with naivety it could be seen as funny. Dorothea meets and marries a certain Mr Casaubon, but the marriage is frowned upon by many residents of Middlemarch, and Dorothea finds it a great burden. However, Casaubon was getting on a bit, and leaves Dorothea widowed before too long, and she is left with a choice, marry his cousin, whom she truly loves, but become poor. Or, remain longing for Will, and retain her inheritance. In this essay I will discuss and compare the many different sources of dissatisfaction that Miss Dorothea Brooke finds throughout the novel. Ultimately deciding upon whether I think that her dissatisfaction is a result of poor choices or due to events beyond her control. From the very start of the novel, the theme of traditional feminine role plays a big part in the story. ...read more.

Many other characters forewarned Dorothea that it could be a poor choice, however her defiance led her to continue with the marriage regardless of all the differences: "Mr Casaubon apparently did not care about building cottages and diverted the talk to the extremely narrow accommodation which was to be had in the dwellings of the ancient Egyptians..." This quote demonstrates something that becomes a familiar scenario throughout the novel, Dorothea has taken to building cottages for the poor in Middlemarch, as a way to overcome her insignificance, however Casaubon doesn't care and promptly returns the conversation to himself. Mr Casaubon seems removed from the community which he is living in, being more interested in the Ancient Egyptians, I think this is a reflection of just how behind the times Casaubon is. I don't think that Casaubon really cares about Dorothea, or her interests, and this infuriates her. The marriage in my opinion is mismatched, but her defiance led her to ignore the signs, and refuse the advice of more intuitive characters. I think that this marriage is a source of dissatisfaction for Dorothea, and one which she did inflict upon herself. The next quote which I shall look at, is not exclusively referring to Dorothea, however, I think it is important to mention, because in my opinion it is fairly significant: "We mortals, men and women, devour many a disappointment between breakfast and ...read more.

She has realised her life is not what she wants, yet she has no way to escape from it, she is imprisoned. At the time it was impermissible to get a divorce except in extreme cases such as an affair, so really her situation wasn't going to change. I also think that the description of the surroundings is important, the shrunken furniture and the narrowed landscape. I think this could be an example of pathetic fallacy, her interior state, projected on the exterior world. As a reader, this is a very emotional part of the novel, we can see how miserable Dorothea's life is, and this is the point where I began to question whether or not it was her fault. The time has arrived for me to begin to draw my conclusions. I believe that no one factor caused Dorothea's dissatisfaction; it is definitely a multi-causal scenario. Some of the factors were brought upon herself, for example the mismatched marriage, the denial throughout the novel, and the final realisation of her predicament. On the other hand, some factors were beyond her control, for example, tradition, society and class, and the expectations of others. Overall, I believe that the majority of factors were beyond her control, however, dependant on the attitude she had approached each problem with, they may not have caused disappointment as such. Her obtuse attitude just made things worse, magnifying insignificant flaws in everybody's lives. ?? ?? ?? ?? Claire Louise Harrington Capp - 10Y1/N5GF 27/07/2009 1 ...read more.