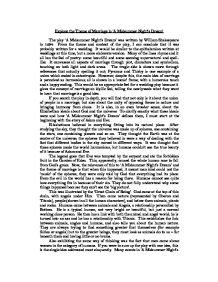 Explore the Theme of Marriage in 'A Midsummer Night's Dream' The play 'A Midsummer Night's Dream' was written by William Shakespeare in 1594. From the theme and context of the play, I can conclude that it was probably written for a wedding. It would be similar to the epithalamion written at weddings at this time, but a more elaborate version. Many of the lines rhyme and it all has the feel of poetry: some beautiful and some seeming supernatural and spell-like. It canvasses all aspects of marriage through plot, characters and symbolism, touching on both light and dark areas. The tragic side is shown more through references that actually spelling it out; Pyramus and Thisby is one example of a union which ended in catastrophe. However, despite this, the main idea of marriage is perceived as harmonious; all is shown in a 'comic' frame, with a humorous touch and a happy ending. This would be an appropriate feel for a wedding play because it gives the concept of marriage an idyllic feel, telling the newlyweds what they want to hear: that marriage is a good idea. If you search the play in depth, you will find that not only is it about the union of people in a marriage, but also about the unity of opposing forces in nature and bringing harmony from chaos. It is also, in an even broader sense, about the Elizabethan ideals about God and the universe. To clarify exactly what these ideals were and how 'A Midsummer Night's Dream' defines them, I must start at the beginning with the story of Adam and Eve. Elizabethans believed in everything fitting into its natural place. After studying the sky, they thought the universe was made up of spheres, one containing the stars, one containing planets and so on. They thought the Earth was at the centre of the universe; the spheres they believed in were a way of dealing with the fact that different bodies in the sky moved in different ways. ...read more.

Theseus is the Duke of Athens and his and Hippolyta's marriage seems to be mainly for political reasons, to bring their people together. Their personalities are very different. Theseus is a very reasoned, ordered man who has much responsibility and represents the active, bustling life of the city. Hippolyta may shock some of the readers of the play, as her Amazonian culture is extremely different from what they would be used to. Although no legends are fully told in the play, anyone who knew the stories may have seen her as a heathen, because it was not acceptable in those days to be a female warrior. Amazonian legends tell of their strict women only society, which is very different to the world the audience of this play will be used to. They worshipped the Moon Goddess Diana. This clearly links Hippolyta with the night time world of the wood, and although she is supposed to be 'civilised' now, marrying the Duke of Athens, there is imagery related to her old life in speeches near the beginning of the play. This suggests she has not totally let go of her past traditions and ideals. For example, in one of her very first lines, she says, "And then the moon, like to a silver bow New-bent in heaven..." Associations can be made between this and both her moon-worshipping and her warrior background. It gives the audience a very subtle glimpse into her past without alarming them - although if they did not know the legends, they would not gather much from this small mention of the moon and bows. Another feature of her Amazonian life would be, as some tales say, that they were not allowed to have sex. This could suggest that marriage is against her religion, and it is an interesting argument to discuss if she actually loves Theseus and wants this marriage to happen, or if she is just playing along. ...read more.

Titania is a Queen, almost God-like, whereas Bottom is simply a weaver who does a little acting in his spare time. This represents how when in love, you do not see the faults of someone, only believe them to be perfect. I will now look closer into the characters commonly called the lovers: Hermia, Lysander, Denetrius and Helena. At the beginning of the play, none of them are happy. Hermia's father is trying to force her to marry Demetrius, but she and Lysander are in love. Helena loves Demetrius, but Demetrius likes Hermia as well. Hermia's father tells Hermia that if she will not marry Demetrius, she will either be killed or forced to live in a nunnery. This is one of the possibilities this play explores; would life be better without men? The theme of love is best characterised by the actions of the lovers. The idea that love is 'blinding' and clouds their judgement is shown by their irrational behaviour. Helena is in love with Demetrius even though she knows he is unfaithful. Lysander says "Demetrius...Made love to Nedar's daughter, Helena, And won her soul; and she...dotes in idolatry, Upon this spotted and inconstant man". This shows Demetrius used to be in love with Helena, but now would rather marry Hermia, even though Helena is still in love with him. Helena has been hurt by him, but the nature of love has clouded her judgement and she cannot see him as anything but wonderful. Also, Hermia would rather suffer death or life in a nunnery than being prevented from being with Lysander. She is also a bit out of touch with reality, her love for Lysander getting in the way of her judgement. Another example of men being in charge is Hermia's father, Egeus, 'owning' his daughter and being able to choose who she marries. This was the view in Elizabethan times; the daughter was her father's 'property' until she was married, when she became the property of her husband. Only Theseus could overrule Egeus' will eventually when he realised that Demetrius no longer wished to marry Hermia. ...read more.