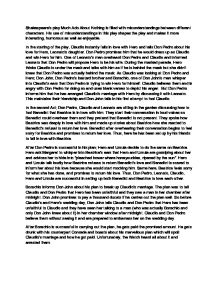 Misunderstandings in Much Ado About Nothing

Shakespeare's play Much Ado About Nothing is filled with misunderstandings between different characters. His use of misunderstandings in this play shapes the play and makes it more interesting, humorous as well as enjoyable. In the starting of the play, Claudio instantly falls in love with Hero and tells Don Pedro about his love for Hero, Leonato's daughter. Don Pedro promises him that he would dress up as Claudio and win Hero for him. One of Leonato's men overheard Don Pedro and Claudio and informed Leonato that Don Pedro will propose Hero to be his wife. During the masked parade, Hero thinks Claudio is under the mask and talks with him as if he is behind the mask but she didn't knew that Don Pedro was actually behind the mask. As Claudio was looking at Don Pedro and Hero; Don John, Don Pedro's bastard brother and Borachio, one of Don John's men whisper into Claudio's ears that Don Pedro is trying to win Hero for himself. ...read more.

Hero ask Margaret to whisper into Beatrice's ears that Hero and Ursula are gossiping about her and advices her to hide into "pleached bower where honeysuckles, ripened by the sun". Hero and Ursula talk loudly how Beatrice refuses to return Benedict's love and Benedict is scared to inform her about his love because she would start mocking him. Same here, Beatrice feels sorry for what she has done, and promises to return his love. Thus, Don Pedro, Leonato, Claudio, Hero and Ursula are successful in setting up both Benedict and Beatrice to love each other. Borachio informs Don John about his plan to break up Claudio's marriage. The plan was to tell Claudio and Don Pedro that Hero has been unfaithful and they saw a man in her chamber after midnight. Don John promises to pay a thousand ducats if he carries out the plan well. So before Claudio's and Hero's wedding day, Don John tells Claudio and Don Pedro that Hero has been unfaithful to Claudio and they have seen her talking to a man (who was actually Borachio and only Don John knew about it) ...read more.

Dogberry's failure of conveying the message improperly shows how foolish and uneducated he is. After Claudio and Don Pedro embarrass Hero on her wedding day, Leonato gets angry with his daughter and sought to kill her. But the Friar believes Hero's innocence and asked them to pronounce as if Hero has died which will make Claudio and other sorry for her. This made Borachio tell them the truth about what exactly happened and who was the mastermind behind the plan. As Hero has died, Leonato will accept his forgiveness only if he marries Antonio's daughter. Claudio promises to do so and on the wedding day of Claudio to Antonio's daughter he finds Hero as Antonio's daughter and is glad to hear that she hasn't died and soon get married. On the same day, Benedict and Beatrice get married although they have promised never to do so. Don John is arrested. The play ends with a happy yet comical ending. ...read more.