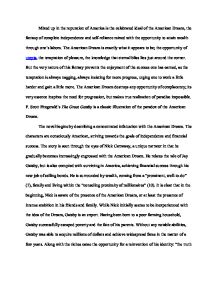 Mixed up in the reputation of America is the celebrated ideal of the American Dream, the fantasy of complete independence and self-reliance mixed with the opportunity to attain wealth through one's labors.

Mixed up in the reputation of America is the celebrated ideal of the American Dream, the fantasy of complete independence and self-reliance mixed with the opportunity to attain wealth through one's labors. The American Dream is exactly what it appears to be; the opportunity of utopia, the temptation of pleasure, the knowledge that eternal bliss lies just around the corner. But the very nature of this fantasy prevents the enjoyment of the success one has earned, as the temptation is always nagging, always insisting for more progress, urging one to work a little harder and gain a little more. The American Dream destroys any opportunity of complacency; its very essence inspires the need for progression, but makes true realization of paradise impossible. F. Scott Fitzgerald's The Great Gatsby is a classic illustration of the paradox of the American Dream. The novel begins by describing a concentrated infatuation with the American Dream. The characters are consciously American, striving towards the goals of independence and financial success. The story is seen through the eyes of Nick Carraway, a unique narrator in that he gradually becomes increasingly engrossed with the American Dream. ...read more.

Even with the elusive qualities of the American Dream, Gatsby spends the next five years of his life striving to achieve his financial success. Throughout his labors he is inspired by "a single green light, minute and far away" (26), always present in his mind and yet always beyond his reach And so he worked, striving for embellished fantasies that increased with every passing day. What he did to make his money is not really important - Fitzgerald was only interested in where Gatsby was in the present, and Gatsby was only interested in where he would be in the future. After five years of extremely focused labor, Gatsby was finally in the position to achieve his American Dream. He had the money, the house, the social connections - everything was in place for him to finally realize his aspirations. And yet, when he finally gets the chance to reunite with Daisy, completely on his own terms, he found no bliss, only disappointment: "As I went over to say goodbye I saw that the expression of bewilderment had come back into Gatsby's face, as though a faint doubt had occurred to him as to the quality of his present happiness. ...read more.

And one fine morning ---So we beat on, boats against the current, borne back ceaselessly into the past" (189). Gatsby spent the better part of his adult life reaching for the American Dream, and now it is Nick's turn. Nick is even aware that Gatsby's Dream "was already behind him, somewhere back in that vast obscurity beyond the city, where the dark fields of the republic rolled on under the night" (189). Even with the realization that attaining the American Dream is impossible, Nick continues forward, occupied only with the task of living his Dream. Therein lies the paradox of the American Dream - the never-ending desire to live out the fantasy created by the Dream, is the very desire that makes the achievement of the fantasy impossible. By basing his entire existence upon realizing the Dream, Gatsby became obsessed with what he didn't have instead of enjoying his accomplishments. While the Dream itself is a vision of prosperity, the phenomenon of the American Dream requires people not to prosper, but to endure. The Dream is not a means to an end; but a way of life - a non-tangible, non-achievable mirage, always just one step out of reach. ...read more.