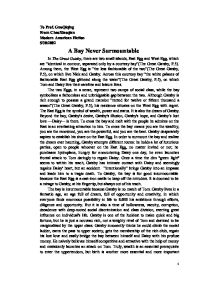 To Prof. GuoQiqing From ChaoXiaoqian Modern American Fiction 5/30/2002 A Bay Never Surmountable In The Great Gatsby, there are two small islands, East Egg and West Egg, which are "identical in contour, separated only by a courtesy bay"(The Great Gatsby, P.5). Among them, the West Egg is "the less fashionable of the two"(The Great Gatsby, P.5), on which live Nick and Gatsby. Across this courtesy bay "the white palaces of fashionable East Egg glittered along the water"(The Great Gatsby, P.5), on which Tom and Daisy live their carefree and leisure lives. The two Eggs, in a sense, represent two camps of social class, while the bay symbolizes a fathomless and unbridgeable gap between the two. Although Gatsby is rich enough to possess a grand mansion "rented for twelve or fifteen thousand a season"(The Great Gatsby, P.5), his residence situates on the West Egg with regret. The East Egg is the symbol of wealth, power and status. It is also the dream of Gatsby. Beyond the bay, Gatsby's desire, Gatsby's illusion, Gatsby's hope, and Gatsby's lost love ---Daisy--- is there. To cross the bay and melt with the people he admires on the East is an everlasting attraction to him. To cross the bay means you are the wealthy, you are the renowned, you are the powerful, and you are the best. ...read more.

With humble background and poor education, Gatsby's entry is inevitably blocked. Those people benefiting from his extravagant and luxurious parties freely, at the same time, show suspicions and scorns toward Gatsby. To them, Gatsby is just a free lunch ticket, a card taken advantage of, no more withal. Actually Gatsby is never equipollent to Tom and is impossible to cross the bay. He is certain to be surrounded by his guests' gossips and maneuvered by them. Money alone is not powerful enough to secure Gatsby's social status. Without noble birth, Gatsby is certain to be betrayed and deserted by Daisy at crucial point. The bay is never surmountable in that Gatsby could never win Daisy. It is impossible for Gatsby to get the true heart of Daisy. The two belong to different social classes. It seems that Daisy once fell in love with Gatsby, they were dating, they had close touch, but all these were underpinned by Gatsby's deliberately giving Daisy a sense of security, letting her believe that he was a person from much the same strata as herself. When war approaches and acts as a touchstone, Daisy doesn't stand the test. She chooses Tom, a man with ''a wholesome bulkiness about his person and his position''(The Great Gatsby, P.151). ...read more.

They are weak people but over-confidently to challenge the authoritative privileged. They think their weapons, (Gatsby's money and Myrtle's personal glamour) are powerful to launch battles against the rich, to break through the stronghold, to take their share of the realm. But they end with failure and tragedies. Tom and Daisy are dominant group, they have consolidated social status, they possess invisible control over others, they not only have enormous wealth, but honorable birth. They are living in a camp, an unchallengeable, impenetrable and indestructible camp. They were people with inherited and accumulated ascendancy. They have the privilege to be careless and irresponsible. ''They smashed up things and creatures and then retreated back into their money or their vast carelessness, or whatever it was that kept them together, and let other people clean up the mess they had made"(The Great Gatsby, P. 180-181). At critical point, there are a natural intimacy and class instinct between Tom and Daisy, which unite them tightly. Gatsby, Myrtle, and George all die so that the Buchanan way of life can go on, their sense of superiority can be sustained, their arrogance can remain inviolate(Lehan, 1992). Gatsby, Myrtle are tragic in that they don't have a clear realization of the snobbish, apathetic and hierarchical society, in which social discrimination and class divisions are pervasive, controlling people's destiny. Wild extravagance of Gatsby's parties could not earn him a mourner, while ash and dust build a grave for Myrtle. ...read more.