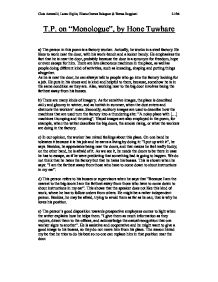 Monologue, by Hone Tuwhare a) The person in this poem is a factory worker. Actually, he works in a steel factory.

T.P. on "Monologue", by Hone Tuwhare a) The person in this poem is a factory worker. Actually, he works in a steel factory. He likes to work near the door, with his work-bench and a locker handy. He emphasizes the fact that he is near the door, probably because the door is a synonym for freedom, hope or even escape for him. There are lots clamorous machines in the place, as well as people doing different kind of activities, such as kneading, shaping and putting things altogether. As he is near the door, he can always talk to people who go into the factory looking for a job. He puts in his shoes and is kind and helpful to them, because, somehow he is in the same condition as they are. Also, working near to the big door involves being the farthest away from his bosses. b) There are many kinds of imagery. As for sensitive images, the place is described chilly and gloomy in winter, and as hottish in summer, when the dust enters and obstructs the workers' noses. ...read more.

e) The person's good disposition towards prospective employees comes to light when the writer explains how he helps them. "I give them as much information as they require, direct them to the offices, and acknowledge the casual recognition that one worker signs to another". He is assistive and cooperative and he might want to give a good image to his bosses, so they do not move him from his place. The reason hinted my be that he tries to do his best so no one can replace him in that position near the door. f) The impact of seeing strangers being turned down for a job is described very well by the author of the poem, and the order of words in his sentence helps to put the message across to the reader. It would not be the same if he had described the feelings of the people who are turned down first and those of the ones who get the job afterwards, because the last part we read is what stays in our head more clearly. ...read more.

j) Reasons given for sitting near the main door. * He is farthest away form those who have to come down to shout instructions in his ear. * He is the first one to greet strangers looking for work. * The factory is dying. * The big doors open out to a short alley leading to the main street. * If the worst happens he would have no grate distance to carry his gear and tool-box off the premises. * In case an earthquake occurs and fire breaks out. They are convincing because they are ordinary things that happen in an ordinary factory. We believe that the most important aspects are that he is the farthest away from his supervisors and that the big doors open out to a short alley leading to the street. If we read between the lines, he also likes his position because the factory is dying. Being there also implies being near freedom and escape. He can save his life and future if something goes wrong in the factory, which is higly possibly because of its deplorable situation. Cleia Antonelli, Laura Giglio, Eliana Gomez Balaguer & Tomas Reggiani 21/04 ...read more.