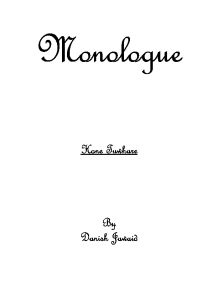 Monologue Hone Tuwhare. It is a narrative or a Soliloquy of a boiler working near the big doors, in extremely harsh and unhealthy conditions. What is more, the workers are treated in an inhumane fashion, such that they are even deprived of their pride.

Monologue Hone Tuwhare By Danish Jawaid Monologue literally means an uninterrupted speech by one person only. Tuwhare has perhaps meant his poem 'Monologue', to be an eye opener for people against the harsh conditions of the workers. It is a narrative or a Soliloquy of a boiler working near the big doors, in extremely harsh and unhealthy conditions. What is more, the workers are treated in an inhumane fashion, such that they are even deprived of their pride. At first the narrator professes that he 'likes' to 'work near a door'. This gives us a feeling that he is about to depart, however it could also imply that the person is ready to move on. The statement is further followed by an end stop, which denotes the finality of his decision and feeling, as if they go on no further. He further asserts that he likes to have his 'locker handy', which points out that he is urgently wishing to get away. The poet then goes into explaining what the atmosphere of the workplace is like. He says that the 'cold creeps' in, which shows how the working conditions are not good, while it can also emphasize on the loneliness and isolation of the workplace. By stating that the cold creeps in from 'under the big doors', the poet is implying that the isolation and coldness in the atmosphere is not only the physical cold, but a chilliness formulated because of the administrators, who are making the workers feel small and undermined. ...read more.

The fact that these people are 'looking' for 'work' makes us realize the harshness of the world that people are so desperate to get work and earn money that they are willing to enter the most vilest of vilest places in search of it. He helps these wanderers by giving them 'as much information as they require'. This shows that the narrator is quite indifferent to people, but not unkind. The actuality that he 'acknowledges' the 'casual recognition' of one worker to another emphasizes on the brotherhood of workers, and how this environment forces them to come together against the tyranny around them. In addition the person can 'always' tell, shows that he has become very experienced in his line of work and that he is never wrong. The use of the word 'hurry' here implies on the fast paced lifestyle and also on the spring of happiness and hope that a successful person establishes upon victory. The fact that he is unmoved by the 'successful' faces but is very much effected by the 'unlucky' ones indicates how he is a good character and is effected only by the problems of people less unfortunate than him. The sixth stanza of the poem starts of by stating that the relater has worked in this place only for fifteen months. But even now he is saying that 'it's too good to last', that this has gone on too long and it's not possible to continue. ...read more.

On the other hand he could literally be asking a question of whether we know how these employers can get considering he has described them all in detail. Nonetheless it could also be a threat to all those who believe that he is wrong and would like to argue. The poem overall has been written in free verse style in strophic form, though the stanza's follow no typical line structure except for the sixth. The poem is written in casual style with the author making perfect free use of simple language, to express his thoughts on the matter of labour, work and social injustice. The poem has a very glum and melancholic atmosphere surrounding it, with its tone being very serious, evaluative and ironical. Very few forms of phonological patterning has been used, though the use of alliteration in the second stanza in the form 'cold creeps', loaned a great deal of information on how exactly was the cold effecting the place. In the sixth stanza, the use of another alliteration, 'fall off' and 'staff' emphasizes that the staff slowly falls away. The use of 'looking', 'lasting' and 'dying' one after the other lays great effect onto the use of 'ing' which in turn highlights on the temporary desires and longings. Metaphorical devices have been used to a great extent to get the correct meaning about, such as the use of 'big doors' to personify the rulers. Others include, 'earthquake', 'fire', 'drift' and 'open'. ****** ...read more.