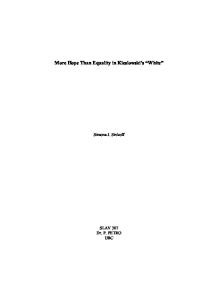 More Hope Than Equality in Kieslowski's "White" Simona J. Sivkoff SLAV 307 Dr. P. PETRO UBC Paris, a distressed man is entering the judicial palace, he is insecure, scared, and does not speak French. This is the first impression of the main character, the Pole--Karol Karol, whose beautiful French wife Dominique has summoned him to the court, so that she is granted a divorce due to his inability to consummate their marriage. She is determined to be happy and fulfilled, she is after all this incredibly beautiful and seductive French woman, who married Karol the Polish hairdresser, and now expects him to fully satisfy her. Dominique's coldness is striking with its inhumanity towards the pity invoking Karol, she cannot wait for him to get used to Paris, to learn French, to integrate and therefore she is divorcing him. The flashback to a white wedding ceremony is interrupting the more and more humiliating scene of Dominique throwing out Karol on the street. The hope of happiness and love associated with their new life together is cut off abruptly and decisively in a court room. This is the opening of the second film of Kieslowski's trilogy "Blue", "White" and "Red". "White" deals with the lives of a man from entering capitalism post-communist Poland and a woman from France--one of the most important countries in Western Europe. ...read more.

The journey to the creation of his new self has begun, a bit rougher than he expected, but this is Eastern Europe, things are not strictly regulated as in the West, and the margin for interpretation is usually much greater. Kieslowski shows through the pain and suffering of the average person-Karol- the true dimensions of love, friendship, family and power. Poland could be seen as an image summarizing the political, economic and social processes taking place as a whole throughout in Eastern Europe, and the hopes and expectations of the people there to be happy and fully integrated with the West always perceived till now as land of happiness and true realized dreams. The murky economic formations that emerged in Eastern Europe gave rise to the new class of entrepreneurs, portrayed in the film by the foreign currency exchange office owner and his not very smart, but well-built friends. Even Karol's brother has entered Western Europe by putting a neon sign on their quite shabby eastern European hair saloon. Sorrow stricken Karol is back there and his brother dutifully nourishes him with hot broth and attentive care. Karol decides to find Mikolaj and tell him that he is willing to kill Mikolaj's friend, if the friend of course still wants it. Karol is portrayed so far as the average, good man, who would rather be abused than be the one who abuses and Kieslowski is showing the spectators the straight face with which Karol ...read more.

She is miming that once she comes out of prison, they could get married and that she loves him too. There is hope in the white light sparkling from the wedding gown Dominique wears throughout the films' flashbacks; after all, nevertheless that Karol suffers now more than before the revenge. Kieslowski through the unconventional twists of human fates reveals the ability of human beings to overcome the basic and socially constructed modes of behaviour. The director emphasizes that there is hope for people to be truly happy and fulfilled if they break away from the dynamics of domination. "White" is a powerful film critiquing the political, economical and emotional struggle for domination in human society, the film nevertheless underlines that nothing is inevitable and as long as people have hope and strive toward a better world they could attain it. In love and friendship all people are equal and are granted the hope for a new beginning, even when they come from a disintegrating Eastern Europe. In "White" the notion of hope is reinforced more dramatically then the mere notion of equality. "White" shows that once the dynamics of victim and oppressor is destroyed on a personal level, when humans realize that happiness is contained in the way they build their lives together without coercion but with mutual understanding and compromise, only then on a larger scale-the world- could there be hope to achieve this allusive dream of equality among different countries. 1,828 words. 2 ...read more.