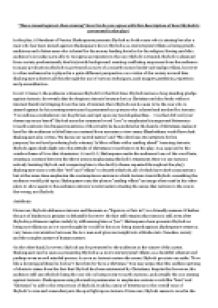 More sinned against, than sinning How far do you agree with this description of how Shylock Is presented in the play?

﻿?More sinned against, than sinning? How far do you agree with this description of how Shylock Is presented in the play? In the play, A Merchant of Venice, Shakespeare presents Shylock as both a man who is sinning but also a man who has been sinned against. Shakespeare shows Shylock as a stereotypical villain as being greedy, malicious and a bitter man who is hated for his money lending but also for his religion. Having said this audience?s nowadays are able to recognise an injustice in the way Shylock is treated. Shylock is shunned from society predominantly due his Jewish background, creating conflicting responses from the audience. In many productions Shylock is portrayed as more of a miserly money lender and malign villain, however to other audiences he is played in a quite different perspective, as a victim of the society around him. Shakespeare achieves all this through the use of various techniques, such imagery,antithesis, repetition and personification. In Act 1 Scene 3, the audience witnesses Shylock for the first time; Shylock nurses a long standing grudge against Antonio, he reveals that he despises Antonio because he is a Christian and also lends without interest therefore bringing down the rate of interest. Here Shylock can be seen to be the one who is sinned against by his contemporaries and is presented as a person who is hated and mocked by Antonio. ?You call me a misbeliever, cut dog throat, and spit upon my Jewish gabardine? You that did void your rheum upon my beard? Shylock uses the command word ?you? to emphasise his anger and bitterness towards Antonio; his frequent mentions of the cruelty he has endured at the hands of Christians makes it hard for the audience to label him as a natural born monster; a view many Elizabethans would have had. Shakespeare also writes, ?He hates our sacred nation? and ?The devil can cite scripture for his purpose/An evil soul producing holy witness/ Is like a villain with a smiling cheek? Accusing Antonio, Shylock again sheds light onto the attitude of Christians towards Jews in the play. ...read more.

Shakespeare presents to the audience a man who has had enough and wishes only have his bond repaid, making the audience feel once again sympathetic and a man who is a victim of the brutal anti-Semitic ideas of his time. However as the speech moves on, Shylock?s pledge to carry out his revenge, more or less changes the audiences view of Shylock as to being villainous; this stereotypical view of a Jew moreover, causing the audience to feel less sympathetic than before. He presents Shylock as a person who cares only for his wealth; Shakespeare uses some quite grotesque imagery in some parts to express his feelings when Shylock is talking to Tubal about his daughter?s elopement. Shylock speaks, ?I would my daughter were dead at my foot, and the jewels in her ear! Would she were hearsed at my foot, and the ducats in her coffin!?And ?Four score ducats at a sitting! Four score ducats!? Here for the audience it is both easy to feel sympathetic towards Shylock but also be quite shocked by his reaction. One can feel pitiful towards Shylock; he has lost his money and his daughter but so are Shylock?s rages about losing all his money which seem to be more important that his daughter. Shakespeare poses quite tragic image of Shylock wishing his daughter dead is undermined by mentioning twice of his stolen wealth. The repetition of ?four score ducats? emphasises how much Shylock values his money and shows how much more he cares for his wealth. Shakespeare use of imagery shows to the audience that Shylock?s greed that perhaps his daughter?s death will recover some of his lost wealth crushes any sympathy we had for him. One may argue that the news has come as a shock to Shylock and so he is distressed and confused. Nevertheless, Shakespeare presents to the audience a sinner and a man who is perhaps a materialist and ruthlessly vengeful. ...read more.

Shakespeare also uses a tri-colon on the phrase ?Why he?, giving the sense that he is accusing the Christians of the years of abuse. Shylock?s imagery draws on the dullest examples unlike the Christians who use poetic images of angels. His speaking seems more erratic at times and almost also perhaps mimics the way he is feeling, angry, edgy and vengeful. By simply justifying his reasons for revenge because ?he feels like it? Shylock presents and intensifies our image of a man who is cruel and insensitive and who will sin against anyone who threatens his wealth. To, conclude Shakespeare is able to effectively present both a Shylock who is ?sinful? but also a person who has been ?sinned against?. Shakespeare successfully conveys Shylocks emotions by how he interacts with his fellow Christians but also how he reacts to events that happen around him. I personally agree with the phrase ?more sinned against that sinning?. Shylock has endured years of abuse at the hands of the Christians; I believe that is what makes him so cruel and unpleasant at times. The outcome of the play certainly swayed my opinion of Shylock but it still remains that Shylock was not in the wrong most of the time in the play, but was the victim of anti-Semitic ideas of the time. Moreover, over the 400 years since the play was written productions have come to show Shylock as a victim not a villain and sometimes our interpretation of Shylock does depend on the production. However, to a certain extent I agree that Shylock at times was more sinning; we cannot overlook the fact that if he had not been stopped by Portia he may well have killed Antonio and that would have completely altered my interpretation of him as a character. In addition, I do believe that Shakespeare deliberately made Shylock to not kill Antonio as a way of perhaps allowing us and to engage in the complexities of human nature (especially Shylock and Portia) and allow us to develop our view and interpretation of Shylock. ...read more.