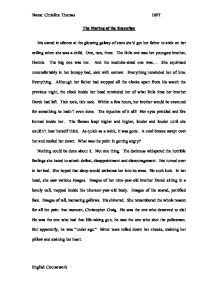 Morning of the execution. Within a few hours, her brother would be executed for something he hadnt even done. The injustice of it all! Her eyes prickled and fire burned inside her.

The Moring of the Execution Iris stared in silence at the glowing galaxy of stars she'd got her father to stick on her ceiling when she was a child. One, two, three. The little one was her youngest brother, Dennis. The big one was her. And the meduim-sized one was... She squirmed uncomfortably in her bumpy bed, sick with sorrow. Everything reminded her of him. Everything. Although her father had stopped all the clocks apart from his watch the previous night, the clock inside her head reminded her of what little time her brother Derek had left. Tick tock, tick tock. Within a few hours, her brother would be executed for something he hadn't even done. The injustice of it all! Her eyes prickled and fire burned inside her. The flames leapt higher and higher, louder and louder until she couldn't hear herself think. As quick as a wink, it was gone. A cool breeze swept over her and cooled her down. What was the point in getting angry? Nothing could be done about it. Not one thing. The darkness whispered the horrible feelings she hated to admit: defeat, disappointment and discouragement. ...read more.

Leaning against the cold worktop, she waited for the kettle, staring out of the window that lead to freedom. Each breath made it harder for Iris to come to terms with what was going to happen. She waited and waited. She imagined Derek, sitting in the cold, dark and dirty cell. A lonely soul. Waiting. Waiting for Death, but at the same time, dreading his arrival. Iris felt the same. She wished that the dreaded hour would come and go as quick as a wink, but at the same time, she wished it would never come. The smell of burnt toast brought Iris back to earth. She applied Derek's favourite strawberry jam on the toasted bread and stirred the tea slowly, watching as it whirled around in the mug. One minute it was a liquid tornado spinning around in the mug and the next minute, it was a dull, steamy cup of tea. Just like her life. One minute they were a happy family of five, next minute they were the same family, dreading the hour that they would become a sorrowful family of four. Just like that. ...read more.

Iris finally got up and tilted up Dennis' baby face to her level. "Let's go downstairs," She said. "No," Dennis replied, pulling himself away from her. Iris sighed. "Dennis," She said calmly. "Dad's downstairs by himself. We need to go down and support him. We need to be there for him." Dennis was silent. "Iris?" he finally asked, his childish voice wobbling like jelly, as though he knew the answer to the question he was about to ask. "When's Derek coiming back?" Iris knew this was coming. She'd spent the whole night rehersing what she was going to say to him, but none of it sounded right for that gloomy, grief-filled moment. "Dennis... it doesn't work like that. Derek's never going to come back," She said those dreadful words that tasted sour in her mouth. "They are punishing Derek for... something he hasn't done. In this world, we call it injustice." Dennis didn't say anything for a long, painful minute. "Is this his last day?" He asked in the same wobbly voice. Without saying anything, Iris took her brother's hand and padded towards the landing, the torn parts of her heart stinging as though there was a fresh wound. ?? ?? ?? ?? Name: Chrisline Thomas 10FT English Coursework ...read more.

An excellent piece of creative writing. Techniques are used superbly to create drama and tension.
Similes, phonological devices, varied syntax, metaphors and description are all skillfully used to create a gripping story.
The dialogue is realistic and there are some wonderful pieces of original imagery.
A very good example of a piece of descriptive writing.