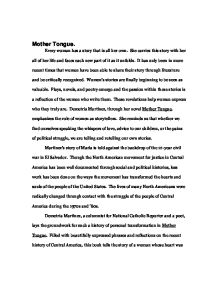 Mother Tongue. Every woman has a story that is all her own. She carries this story with her all of her life and faces each new part of it as it unfolds. It has only been in more recent times that women have been able to share their story through literature and be critically recognized. Women's stories are finally beginning to be seen as valuable. Plays, novels, and poetry emerge and the passion within these stories is a reflection of the women who write them. These revelations help women express who they truly are. Demetria Mart�nez, through her novel Mother Tongue, emphasizes the role of women as storytellers. She reminds us that whether we find ourselves speaking the whispers of love, advice to our children, or the pains of political struggle, we are telling and retelling our own stories. Mart�nez's story of Mar�a is told against the backdrop of the 12-year civil war in El Salvador. Though the North American movement for justice in Central America has been well documented through social and political histories, less work has been done on the ways the movement has transformed the hearts and souls of the people of the United States. ...read more.

In the pursuit of her his heart, she comes face to face with the deep scars of war in the dark places of his soul and attempts to exorcise the enormity of his pain with her affection. She is overwhelmed with passion for both the people who suffer in this El Salvador and her passion is heightened by her love for Jos� Luis. Mar�a's romantic illusions about Jos� Luis and the nature of their love continually run up against reality in this book. Though Jos� Luis is somewhat more experienced at love, his own biased misconceptions of who North Americans are and what they want sabotage his relationship with Mar�a from the start. In the process, Mar�a gains the inner experience that pushes her into a new life far beyond what she might have known if she had not taken the risky leap of love. This is where Mar�a's story begins. She encounters its painful, abrupt end when Jos� Luis abuses her in a panicked fit of war flashbacks. She remembers, "my face had disappeared and became the face of the soldier . . ...read more.

It gives her the strength to travel to El Salvador to find out what really happened to Jos� Luis. When his whereabouts are declared unknown, she has the fortitude to embrace it as another chapter in her story. The most poignant turn of events, however, is beyond Mar�a's grasp, and promise that her story is anything but over. Key to understanding Martinez's portrait of Mar�a is that is a work in progress. Mar�a documented the facts, the emotions, and the mysteries that surrounded both her love for Jos� Luis and her passion to make the world a better place. In doing so she realized that her story is never quite over, but appears in many reincarnations and manifests itself in unusual ways. To reveal the end of this novel would be cheating its ultimate purpose: to encourage women to live with passion, remember their individual stories, and work towards a more peaceful future for their children. While the large frame of this work involves politics and love, Demetria Mart�nez deftly turns this story inward and gives us a compassionate portrait of a woman who learns to exchange her fragility for strength. Mar�a admits the fundamental truth of the woman as storyteller: "I am just beginning to discern the shape that was there all along, just beginning to become me" (190). ...read more.