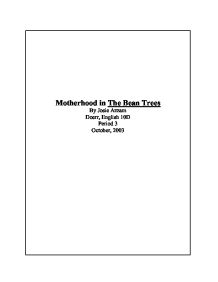 Motherhood in The Bean Trees.

Motherhood in The Bean Trees By Josie Azzam Doerr, English 10D Period 3 October, 2003 The Bean Trees by Barbara Kingsolver, is a book with extreme depth, resulting from the many symbols and motifs present. Although the story line is above and abroad, the depth in which the symbols go into put an entire different intellectual perspective upon the book, making it represent all the different ideas and opinions that Kingsolver wishes to get across, but through furtive ways. A principal motif in the story is that of motherhood, an ever reoccurring theme, mainly displayed in Taylor and Turtle's relationship, but also through the rest of the characters, who all have a mother or mother-like role or relationship. Motherhood and the role of a mother plays a predominant part in The Bean Trees. Taylor Greer, the protagonist, had a very good childhood with a mother who loved her and only her. ...read more.

You know the way it is'." (pg.9) Unlike Taylor, Jolene Shanks had a father who didn't care for her and was very abusive in his words, thus showing how much the treatment and amount of respect and affection can affect a child and their behavior. Later in the book, when Taylor is speaking of parenthood to her mother on the phone, her mother says "'I don't think blood's the only way kids come by things honest. Not even the main way. Its what you tell them, Taylor. If a person is bad, say, then it makes them feel better to tell their kids that they're even worse. And then that's just exactly what they'll grow up to be. You remember those Hardbines? 'Yeah. Newt. I especially remember Newt.' 'That boy never had a chance. He as just doing his best to be what everybody in Pittman said he was.'" (pg.223) showing that whatever example one sets for their children, their children can end up no better than that example. ...read more.

She is of the most passionate of mothers in the book, and will do her utmost to see to it that Dwayne Ray will live past 2000, despite whatever her dreams and nightmares may tell her. Taylor, the main mother of the book, is the only non-biological mother represented, which makes her relationship with Turtle all the more special, meaning that she took her despite their lack of family ties, and fought to keep her, although she could have easily relinquished her duties as mother. Throughout the book, she plays a role she's avoided all her life, in order to protect and care for this little girl that was given to her care against her own wishes. She has absolutely no clue what to do, and constantly worries that she isn't raising Turtle properly. Her worries are lessened, however, after Turtle beings speaking, her first noise being laughter because if Turtle was unhappy, she would have not laughed when she did a somersault. ...read more.