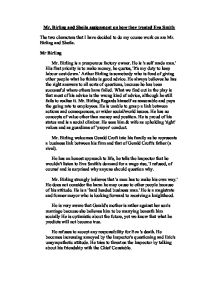 Mr. Birling and Sheila assignment on how they treated Eva Smith.

Mr. Birling and Sheila assignment on how they treated Eva Smith The two characters that I have decided to do my course work on are Mr. Birling and Sheila. Mr Birling Mr. Birling is a prosperous factory owner. He is 'a self made man.' His first priority is to make money, he quotes, 'It's my duty to keep labour cost down.' Arthur Birling is somebody who is fond of giving other people what he thinks is good advice. He always believes he has the right answers to all sorts of questions, because he has been successful where others have failed. What we find out in the play is that most of his advice is the wrong kind of advice, although he still fails to realise it. Mr. Birling Regards himself as reasonable and pays the going rate to employees. He is unable to grasp a link between actions and consequences, or wider social/world issues. He has no concepts of value other than money and position. He is proud of his status and is a social climber. ...read more.

He tries to threaten the Inspector by talking about his friendship with the Chief Constable. The most disturbing part of the play for Birling is the scene in which he learns that his own son is shown to be a thief, a drunkard and is responsible for fathering a child. When he learns of all this he exclaims 'You damned fool - why didn't you come to me when you found yourself in this mess?' Eric's reply indicates that Mr Birling was never close to his son, 'Because you're not the kind of chap a man could turn to when he's in trouble'. Such a response indicates that things aren't going to improve much after the play ends. He represents a very unattractive sort of person. At the end of the play he grudgingly wishes things were better but even here he still thinks in terms of money, 'Look, Inspector - I'd give thousands.' He continues to ignore the shameful things that his family has done. When it appears that the Inspector might be a hoaxer he is happy to believe that everything is as it was a few hours ago. ...read more.

The Inspector says that she is only partly responsible and later on, when he is about to question Gerald, he encourages her to stay and listen to what he has to say so that she doesn't feel entirely responsible. Not only is she prepared to admit her faults, she also appears keen and anxious to change her behaviour in the future, 'I'll never, never do it again.' She is aware of the mystery surrounding the Inspector, yet realises that there is no point in trying to hide the facts from him. She is mature about the breaking up of her engagement and remains calm. She won't be rushed into accepting the ring back once the Inspector has left. She is unable to accept her parents' attitude and is both amazed and concerned that they haven't learned anything from the investigation. Although the Inspector might be a hoax, the family have still behaved in an entirely unsuitable manner. She learns of her responsibilities to others less fortunate than herself (the idea of the community) and is sensitive. Her readiness to learn from experience is in great contrast to her parents. ...read more.

The points made are all relevant and many are supported with appropriate examples from the play, including quotations. However, these points could be developed further especially how did Mr Birling and Sheila treat Eva and how responsible were they for her tragic death? A good source to help this development would be to make references to Priestley's detailed stage notes and directions which make many relevant points about Mr Birling and Sheila.