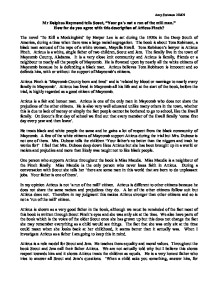 Mr Dolphus Raymond tells Scout, &quot;Your pa's not a run of the mill man.&quot;How far do you agree with this description of Atticus Finch?

Mr Dolphus Raymond tells Scout, "Your pa's not a run of the mill man." How far do you agree with this description of Atticus Finch? The novel 'To Kill a Mockingbird' by Harper Lee is set during the 1930s in the Deep South of America, during a time when there was a large racial segregation. The book is about Tom Robinson, a black man accused of the rape of a white woman, Mayella Ewell. Tom Robinson's lawyer is Atticus Finch. Atticus is a white, single father of two children, Scout and Jem. The family live in the town of Maycomb County, Alabama. It is a very close knit community and Atticus is family, friends or a neighbour to nearly all the people of Maycomb. He is frowned upon by nearly all the white citizens of Maycomb because he is defending a black man. Atticus believes Tom Robinson is innocent and so defends him, with or without the support of Maycomb's citizens. Atticus Finch is 'Maycomb County born and bred' and is 'related by blood or marriage to nearly every family in Maycomb'. Atticus has lived in Maycomb all his life and at the start of the book, before the trial, is highly regarded as a good citizen of Maycomb. Atticus is a fair and honest man. Atticus is one of the only men in Maycomb who does not share the prejudices of the other citizens. He is also very well educated unlike many others in the town, whether this is due to lack of money or simply the fact people cannot be bothered to go to school, like the Ewell family. On Scout's first day of school we find out that every member of the Ewell family 'come first day every year and then leave'. He treats black and white people the same and he gains a lot of respect from the black community of Maycomb. ...read more.

He respects the black community just as he would the white community, this shows the characteristics of a gentleman. We can see this when he is talking to Calpurnia, the Finch family's maid. Calpurnia is a black woman who has worked for Atticus since his wife died. Even though she is black Atticus has a great deal of respect for her, unlike many employers at the time Atticus treats Calpurnia well, even offering to drive her home one night. Atticus is a polite and courteous man and is 'the same in his house as he is on the public streets.' He is a very calm man who never shows a short temper throughout the book. We see an example of this when Bob Ewell spits at him, rather than snapping at Bob Ewell, he simply takes it in his stride, gets out his handkerchief and says 'I wish Bob Ewell wouldn't chew tobacco'. As Atticus is a lawyer he has to be a gentleman, but not all lawyers were gentlemen. Many lawyers would have been disrespectful to the witness they were cross examining but Atticus was an exception. He refers to Mayella Ewell as 'Miss. Mayella', this a sign of respect towards her. A gentleman would always be respectful. Mrs. Dubose is 'the meanest woman who ever lived' and is consistently rude to Atticus and both his children yet Atticus always pays her a compliment. 'You look a picture today' Atticus said to Mrs. Dubose. As a gentleman in the 1930s I do not believe Atticus is 'run of the mill'. I believe if it was set in a later era, when there was no racial segregation Atticus would be more of a 'run of the mill' gentleman. However, during this time not many people showed respect to the black community but Atticus did and I believe this would have deserved respect. These are the main reasons why I do not consider Atticus as a 'run of the mill' gentleman. ...read more.