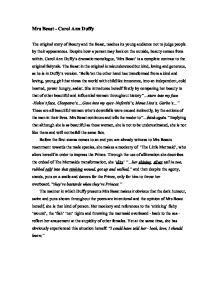 Mrs Beast - Carol Ann Duffy The original story of Beauty and the Beast, teaches its young audience not to judge people by their appearances. Despite how a person may look on the outside, beauty comes from within. Carol Ann Duffy's dramatic monologue, 'Mrs Beast' is a complete contrast to the original fairytale. The Beast in the original is misunderstood but kind, loving and generous, as he is in Duffy's version. 'Belle'on the other hand has transformed from a kind and loving, young girl that views the world with childlike innocence, into an independent, cold hearted, power hungry, sadist. She introduces herself firstly by comparing her beauty to that of other beautiful and influential women throughout history"...stare into my face -Helen's face, Cleopatra's,...Gaze into my eyes -Nefertiti's, Mona Lisa's, Garbo's..." These are all beautiful women who's downfalls were caused indirectly, by the actions of the men in their lives. Mrs Beast continues and tells the reader to"...think again." Implying that although she is as beautiful as these women, she is not to be underestimated, she is not like them and will not befall the same fate. ...read more.

It is obvious from Mrs Beast reaction to each of his declarations of adoration that it is his erection and her power over him that impresses her most, and seeing as she already has wealth and beauty those are the very reasons that she is here. Mrs Beast reinforces the imagery of her power in the third stanza. She informs us that she is in charge as she tells the reader "The lady says Do this. Harder. The lady says Do that .Faster." The pig in her bed was "invited." and if he fouled the sheets "...then, he'd wash them. Twice." Despite the Beasts subservience and his desire to please, Mrs Beast is continuously cruel with the style in which she describes him, and you can imagine that she addresses him in the same manner. She describes him as being "ugly as sin" and seems in some ways repulsed when referring to his breath being that of a goat, "...his horrid leather tongue" scouring between her toes and "...his hooked and yellow claws.." ...read more.

Duffy may be using this sentence in reference to the other wives within the book who were less fortunate. Mrs Beast is definitely directing her passage at a female audience, when talking to her listeners she refers to them as "..girls." she is instructing female listeners to take heed and listen to her advice "...they're bastards when they're Princes./ What you want to do is find yourself a Beast" She implies that good looking guys will treat you badly, whereas the ugly ones are not only better in bed but will also do as they're told. Mrs Beast rebels against a male dominated society, she doesn't want to be perceived as the weak female. She ensures that 'she' is the dominate one in all aspects of their relationship. She has successfully maintained her independence and power, yet goes to the extreme and develops the same aggressive male traits that she herself has judged. In order to protect her own insecurities, Mrs Beast has become cold hearted and unfeeling "Let the less loving one be me." She treats the Beast this way, not only because he allows her, but because if she loves him less, then she herself cannot be hurt. ...read more.