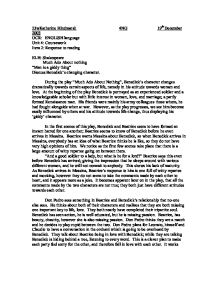 Much Ado About nothing

23wKatherine Hindmarsh 4NG 19th December 2003 OCR: ENGLISH language Unit 4: Coursework Item 2: Response to reading ELH: Shakespeare Much Ado About nothing "Man is a giddy thing" Discuss Benedick's changing character. During the play "Much Ado About Nothing", Benedick's character changes dramatically towards certain aspects of life, namely in his attitude towards women and love. At the beginning of the play Benedick is portrayed as an experienced soldier and a knowledgeable scholar but with little interest in women, love, and marriage; a partly formed Renaissance man. His friends were mainly his army colleagues those whom, he had fought alongside when at war. However, as the play progresses, we see him become easily influenced by others and his attitude towards life change, thus displaying his 'giddy' character. In the first scenes of this play, Benedick and Beatrice seem to have formed an instant hatred for one another; Beatrice seems to know of Benedick before he even arrives in Messina. Beatrice warns Messina about Benedick, so when Benedick arrives in Messina, everybody has an idea of what Beatrice thinks he is like, so they do not have very high opinions of him. We notice as the first few scenes take place that there is a large amount of witty repartee going on between them. ...read more.

He says "when I said I would die a bachelor, I did not think that I should live till I were married," this gives the impression that if what the soldiers said was true, he would marry Beatrice. His character changes in a very short time in this scene, changing from being completely against marriage, to almost saying he will marry in the future. This is a very sudden change to his character, so displaying that he is easily influenced by others, and showing once again his giddy character. Benedick, at the start of the play, gives the impression that love is for the weak minded and only people who have nothing better to do with their lives fall in love. After the scene in the orchard; Benedick has realizes just by thinking that someone loves him, how happy this has made him, so he starts to think how much happiness he could get from loving someone else. After he over hears the other characters talking in the orchard, he talks to the audience a long speech, where he says, "I have railed so long against marriage: but doth not the appetite alter?" Benedick all the way through the play is trying to do things to make other people happy, and please people who have more authority then he has. ...read more.

His character from the denunciation has been permanently changed from a misogamist to that of a man who has fallen in love with somebody and wants to marry her. Benedick has changed through the duration of the play; he has become a mature man because of love. Since he has found passion with Beatrice, he has calmed down. When some of the characters start to tease the older generation of Messina, Benedick refuses to take part in these actions of ridicule. He has become more sociable and civilized and the Messina has noticed that he has matured a lot through the play. He has become more of a gentleman and thinks about others before himself. He doesn't want anybody to miss out on the happiness that he has worked hard for with Beatrice and tries to get Don Pedro to get married. "Prince, thou art sad, get thee a wife" He is now so happy with Beatrice and even though they were tricked into liking each other they notice how much they like each other. This is a completely different Benedick than at the start of the play, who despised marriage, and said that to get married is the last thing he wanted to do in his life, no-one would have guessed as the play came to an end, and that Benedick would be married. ...read more.