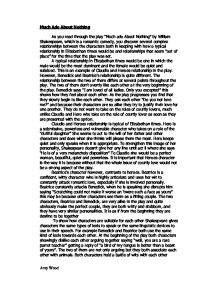 Much Ado About Nothing.

Much Ado About Nothing As you read through the play "Much ado About Nothing" by William Shakespeare, which is a romantic comedy, you discover several complex relationships between the characters both in keeping with how a typical relationship in Elizabethan times would be and relationships that seem "out of place" for the time that the play was set. A typical relationship in Elizabethan times would be one in which the male would be the most dominant and the female would be quiet and subdued. This is an example of Claudio and Heroes relationship in the play. However, Benedick and Beatrice's relationship is quite different. The relationship between the two of them differs at several points throughout the play. The two of them don't overtly like each other at the very beginning of the play. Benedick says "I am loved of all ladies. Only you excepted" this shows how they feel about each other. As the play progresses you find that they slowly begin to like each other. ...read more.

It is as if from the beginning they are destine to be together To show how characters are suitable for each other Shakespeare gives characters the same types of lexis to speak or the same linguistic devices to use in their speech. For example Benedick and Beatrice both use the same kind of lexis towards each other. At the beginning of the play both characters showingly dislike each other arguing together saying "well, you are a rare parrot teacher" getting a reply of "a bird of my tongue is better than a beast of yours". The two of them are not only arguing but they both associate each other with animals. Both characters hold a battle of wits with each other when they argue both characters use the same kinds of witty, comical, snappy language. As the play progresses however, Beatrice's and Benedick's attitude towards each other changes. Both characters discover that they like each other and their language and actions show this. ...read more.

This contrasts to Claudio's character who is rather serious and wants to marry Hero for money and status. Typical relationships of the time would have been that way. In conclusion the two relationships differ from each other quite dramatically in this play, although they both end up with a happy ending. Claudio and Hero are courtly lovers. They have little to say for themselves and tend to do as others wish to make their marriage work. Their marriage is simple and desirable to everyone. However Beatrice and Benedick share negative attitudes towards courtly love. Benedick has an inability to make romantic gestures but takes pride in his character even though Beatrice uses it against him. He likes his "Batchelor status" and swears not to turn to romantic love as Claudio did. Beatrice is much like Benedick in a way but does want to marry eventually. Both characters have the convention of romantic comedy. Their relationship is eventually a loving one but unlike Claudio and Hero, with whom it was love at first sight, their relationship is slow, steady and progressive. Both relationships are happy ones but both differ dramatically throughout. Amy Wood ...read more.