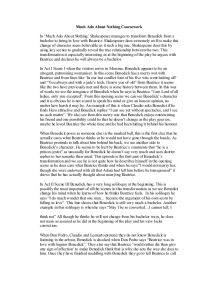 Much Ado About Nothing Coursework In 'Much Ado About Nothing' Shakespeare manages to transform Benedick from a bachelor to being in love with Beatrice. Shakespeare does extremely well to make this change of character seem believable as it such a big one. Shakespeare does this by using key scenes to gradually reveal the true relationship between the two. This transformation is especially interesting as at the beginning of the play he argues with Beatrice and declares he will always be a bachelor. In Act I Scene I when the visitors arrive in Messina, Benedick appears to be an arrogant, patronising womaniser. In this scene Benedick has a merry war with Beatrice and from lines like 'In our last conflict four of his five wits went halting off' and "You always end with a jade's trick, I know you of old" from Beatrice it seems like the two have previously met and there is some history between them. In this war of words we see the arrogance of Benedick when he says to Beatrice "I am Lord of all ladies, only you excepted". From this opening scene we can see Benedick's character and it is obvious he is not scared to speak his mind or give an honest opinion, no matter how harsh it may be. ...read more.

When Don Pedro, Claudio and Leonarto pretend they do not know Benedick is listening in the arbour, Benedick is shocked when Don Pedro says "Beatrice was in love with Signior Benedick". They also say that Beatrice 'would rather die than give any sign of affection' to make Benedick think that is why she acts the way she does to him. Once they have finished meddling with Benedick they go to tell Beatrice to call Benedick for dinner to see his reaction. In the second soliloquy Benedick has in this scene he seems confused. He says that her love must be requited even if he is mocked by people for his sudden change I character, which shows us he is thinking about love and is not bothered about how his reputation as a bachelor will be affected. He then admits that she is 'fair' 'virtuous' and 'wise' which is how he describes the only women that he could ever marry earlier on in the scene. He debates his decision to always be a bachelor and what he thinks of Beatrice before concluding "No; the world must be peopled. When I said I would die a bachelor. I did not think I should live till I were married". ...read more.

Even though he has transformed he still has some trouble accepting the fact he is in love. "I love thee against my will" is what Benedick writes and he would rather say this than admit he is truly in love. He says that he 'suffers love' and it is almost like he believes love is something he has contracted like a disease and there is nothing he can do to get rid of it. In Act V Scene IV, Benedick's transformation is complete. He says that to Leonarto "Your niece regards me with an eye of favour. And I do with an eye requite her". Benedick does seem to return to his true self, however his love cannot be hidden when Claudio and Don Pedro arrive. Even when Benedick proposes to Beatrice he says he takes her in 'pity', this shows that even though he is no longer a bachelor, he is still as patronising as he was at the beginning of the play and he has not lost any of his wit. Beatrice continues this merry war by saying "I yield upon great persuasion'#". In Benedick's final soliloquy he talks about marriage. "I will think nothing to anyone that the world can say against it". This shows that Benedick has finally accepted marriage and his love for Beatrice. He is no longer a bachelor ?? ?? ?? ?? ...read more.