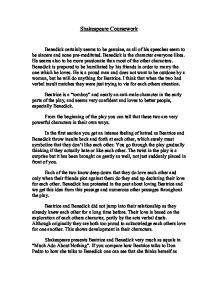 Shakespeare Coursework Benedick certainly seems to be genuine, as all of his speeches seem to be sincere and none pre-meditated. Benedick is the character everyone likes. He seems also to be more passionate than most of the other characters. Benedick is prepared to be humiliated by his friends in order to marry the one which he loves. He is a proud man and does not want to be outdone by a woman, but he will do anything for Beatrice. I think that when the two had verbal insult matches they were just trying to vie for each others attention. Beatrice is a "tomboy" and nearly an anti-male character in the early parts of the play, and seems very confident and loves to better people, especially Benedick. ...read more.

Each of the two know deep down that they do love each other and only when their friends plot against them do they end up declaring their love for each other. Benedick has protested in the past about loving Beatrice and we get this idea from this passage and numerous other passages throughout the play. Beatrice and Benedick did not jump into their relationship as they already knew each other for a long time before. Their love is based on the exploration of each others character, partly by the acts verbal duels. Although originally they are both too proud to acknowledge each others love for one another. This shows development in their characters. ...read more.

Don Pedro: Will you have me, lady? Beatrice: No, my lord, unless I might have another for working-days, your grace is too costly to wear every day. If the same scenario (Benedick suspected Beatrice of cheating on him) had happened to Benedick and Beatrice then I am sure Benedick would have investigated further before taking any action as he trusts more readily. This trust is shown when despite not believing that Claudio wronged Hero he goes with Beatrice��s word and challenges Claudio. This also shows that Beatrice and Benedick would do anything for each other, even kill ones best friend to prove their love for one another. Beatrice and Benedick have been well acquainted for a long time, "I know you of old". Whereas the couple of Claudio and Hero barely know each other before they decide that they love each other. ...read more.