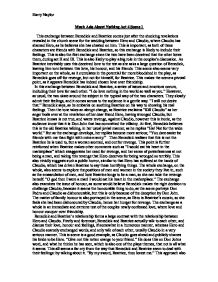 Much Ado About Nothing Act 4 Scene 1 - review

Much Ado About Nothing Act 4 Scene 1 This exchange between Benedick and Beatrice comes just after the shocking revelations revealed in the church scene for the wedding between Hero and Claudio, where Claudio has shamed Hero, as he believes she has cheated on him. This is important, as both of these characters are friends with Benedick and Beatrice, so this exchange is likely to include their feelings. This is also the first exchange since the two have been deceived that the other loves them, during act II and III. This is also likely to play a big role in the couples's discussion. As Beatrice inevitably uses this deceived love to the test as she asks a large question of Benedick, leaving him torn between this love, his honour, and his friends. This scene also seems very important on the whole, as it cumulates in the potential for more bloodshed in the play, as Benedick goes off for revenge, but not for himself, for Beatrice. This makes the scene a pivotal point, as it appears Benedick has indeed chosen love over friendship. In this exchange between Benedick and Beatrice, a series of issues and emotions occurs, including their love for each other. ...read more.

This is scene is a good example, as Claudio goes ahead and publicly shames his bride to be Hero. "Give not this rotten orange to your friend." He does this on Don Johns word, and what he thinks he has seen, which is also one of the plays themes, that not is all what it seems. This all seems a far cry from the way that Benedick and Beatrice seem to deal with their feelings: by talking about it. "By my sword, Beatrice, thou lovest me." This approach also seems much more logical to the audience, as how would Claudio know what Hero is like if he has never talked to her, yet he readily believes that she had wronged him, with minimal persuasion. In this light, the audience could be persuaded that Claudio is dishonourable, as he has publicly shamed the woman, who the audience know is innocent. Benedick is also somewhat developed as a character. Previously in the play, the audience has seen Benedick in a much different light to what he has become by the end of this scene. Previously in the play, we have scene his and Beatrice's exchanges laced with humour, right at the beginning of the play for example. ...read more.

The revelations made by Claudio came across as shocking, even though he had already announced that he was going to do it in the previous act, the grim reality of the public shame dawned when he announced "There Leonato take her back again." Claudio over dramatises the whole affair, which makes me feel almost embarrassed for him, this is however typical Claudio. "I'll lock up all the gates of love." He announces. My most surprising response, however, came from the exchange between Benedick and Beatrice. At the start of their conversation, I was expecting what had gone before, a humorous conversation, which is what Benedick also expected. At first I was shocked of Beatrice's comments "Kill Claudio" but this was little in comparison with her vividly horrific description of "I would eat his heart in the marketplace." This is utterly compelling and shocking on first impressions. However, after some exploration, and the relation of the scene on the theme of honour and love, her comments lose this thought, and I realise that Beatrice only wants to do what Hero deserves, and get revenge for the awful things Claudio did to her, but at the same time, I feel sorry for Claudio, as he has been deceived into this by Don John, and he is going to pay, for something he has not believingly done. Harry Naylor ...read more.