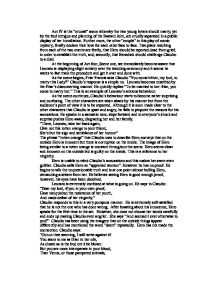 Much Ado About Nothing Act IV.

Act IV is the "crucial" scene whereby the two young lovers should marry; yet by the foul intrigue and planning of the Bastard John, are cruelly separated in a public display of her humiliation. Further more, the other "couple" in this play of comic mystery, finally declare their love for each other face to face. Two plans resulting from each of the two events are firstly, that Hero should be reported dead from grief, in order to establish the truth, and, secondly, that Benedick should challenge Claudio to a duel. At the beginning of Act four, Scene one, we immediately become aware that Leonato is displaying slight anxiety over the wedding ceremony and it seems he wants to fast track the procedure and get it over and done with. As the scene begins, Friar Francis asks Claudio "You come hither, my lord, to marry this Lady?" Claudio's response is a simple no. Leonato becomes unsettled by the Friar's disconcerting manner. He quickly replies "To be married to her: friar, you come to marry her." This is an example of Leonato's anxious behaviour. ...read more.

She says "And seemed I ever otherwise to you?" Claudio has been using the imagery that on the outside things appear differently and has mentioned the word "seem" repeatedly. Hero has not made the connection. Claudio says: "Out on thee seeming, I will write against it! You seem to me as Dian in her orb, As chaste as is the bud ere it be blown: But you are more intemperate in your blood, Than Venus, or those pampered animals, That rage in savage sensuality." Claudio uses the rhythm to express his rage and it is propelled by his anger. Here Claudio introduces blood to give the impression of sexuality and guilt. Leonato addresses Don Pedro, but he also refuses to defend Hero's honour, telling Leonato that he watched with his own eyes as Hero romped with another man the night before. When describing what he saw he goes to the extreme by calling Hero a "common stale". It is surprising that Claudio shames Hero in the appalling way; instead of cancelling the wedding like any noble gentlemen would he choose to publicly shame and disgrace her. ...read more.

She leads him on and he is unaware of what is about to be asked of him. Beatrice asks him to "Kill Claudio" these words are extremely powerful. Beatrice's request is completely irrational and comes out of the blue, at first Benedick refuses but he subsequently changes his mind after Beatrice erupts and unleashes a barrage of spiteful words at him defending her cousin. It seems as though Beatrice is playin the more dominant character. Although Much Ado About Nothing is set in Messina, Shakespeare is really exploring sixteenth century England and men's attitudes at this time. Hero is a stereotype in this play and Beatrice, who speaks her mind is seen as unusual. Throughout the play Shakespeare emphasises the superiority of men and the fact that a woman's future relied purely on her social status. He also conveys how virginity is imperative when it comes to marriage. Today, although virginity is less important when it comes to marriage and people marry for love, men and women are still not seen as equal. Even today men hold most senior positions and in eastern societies, many women still live in a highly male-dominated world. ...read more.