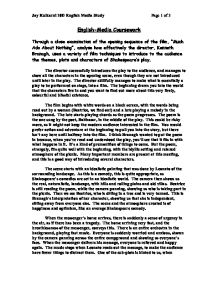 &quot;Much Ado About Nothing&quot; analyse how effectively the director, Kenneth Branagh, uses a variety of film techniques to introduce to the audience the themes, plots and characters of Shakespeare's play.

English-Media Coursework Through a close examination of the opening sequence of the film, "Much Ado About Nothing", analyse how effectively the director, Kenneth Branagh, uses a variety of film techniques to introduce to the audience the themes, plots and characters of Shakespeare's play. The director successfully introduces the play to the audience, and manages to show all the characters in the opening scene, even though they are not introduced until later in the play. The director skillfully manages to make what is essentially a play to be performed on stage, into a film. The beginning draws you into the world that the characters live in and you want to find out more about this very lively, colourful and blissful existence. The film begins with white words on a black screen, with the words being read out by a woman (Beatrice, we find out) and a lute playing a melody in the background. The lute starts playing chords as the poem progresses. The poem is the one sung by the poet, Balthasar, in the middle of the play. This could be risky move, as it might not keep the modern audience interested in the film. You would prefer action and adventure at the beginning to pull you into the story, but there isn't any here until halfway into the film. ...read more.

They're only friendly jests, and here we know about the rivalry between Beatrice and Benedick. And Beatrice's independence is again shown when she stands up for herself to both Leonato, her uncle, and the messenger. Her boldness and quick thinking, with her feeding the messenger a grape and her witty remarks are also obvious. When they see the horses arriving over the hill, there is, again, a great sense of urgency, with all the men and women rushing off to get ready. This is when you get to see most of the main male characters arriving on horseback from the war. There is another bout of strong, urgent music, and you can see both sides in slow motion. This is very effective, as it shows you the men and women individually. The camera focuses on different things, like the hooves of the horses and people running. This gives us the impression that things seem slower because they're excited. It shows the women excited because the men have come back from the war. The music then changes to martial, when the men are the only ones shown, all on horseback. It shows us all the important characters from the play itself, focusing on the company standard, hooves and then the men themselves. ...read more.

The camera cuts between the two of them very fast, giving us a sense of awe at the speed these two think up remarks. At the end of this, after everyone's finished laughing, the music, which had stopped at the beginning of the joust, starts again, but morosely, as everyone notices Don John. Everyone is quiet, as Leonato approaches him, while in the background, a violin plays sad music, as if something has happened to Don John, and there is cause for grief. Leonato speaks in a hushed voice, as does Don John, who also stutters when he speaks, giving us a feeling that he is slightly sinister. Don John stands off to one side, showing us that he is a loner and even stands apart from his friends and his brother, telling us that there is hatred between the two. After this bit, everyone forgets about him and walks off, all happy. Bubbly music in the background gives us a heightened sense that this is like a party. As you can see, Branagh has successfully made the play into a movie without a hitch. He uses a variety of filming techniques unavailable to those on stage, and used them well to create and introduce likeable characters. He has managed, in about 10 to 15 minutes, most of the plot details, characters and themes of the play, "Much Ado About Nothing". Jay Kulkarni 10D English Media Study Page 1 of 3 ...read more.

The essay writer demonstrates some useful insight into the film techniques used in this opening sequence, effectively showing us how the director introduces us to the social setting and the circumstances of warriors returning from battle by using skillful camerawork, music and mostly
unspoken interaction amongst the characters.

More could have been said in the introduction to set out the intentions of the essay writer and a fuller conclusion could have summed up the findings of the discussion. Because the criteria for this evaluation were not set out at the beginning, what we get is a competent account of many of the techniques used but little actual "evaluation". To what extent are the techniques successful? Are there any examples of these techniques falling short of their intention?

Paragraph and sentence construction are mostly sound, with very few slips, and the lexis is up to the task.