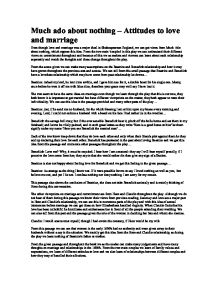 Much ado about nothing - Attitudes to love and marriage.

Much ado about nothing - Attitudes to love and marriage Even though love and marriage was a major ideal in Shakespearean England, we can get views from Much Ado about nothing, which oppose this idea. From the two main 'couples' in this play we can understand their different views on commitment throughout and because of this we as readers and viewers can learn about each relationship separately and watch the thoughts and ideas change throughout the play. From the scene given we can make many assumptions on the Beatrice and Benedick relationship and how it may have grown throughout the previous acts and scenes. We can tell from this small passage that Beatrice and Benedick have a love/hate relationship which may have come from past relationship let downs... Beatrice: indeed my lord, he lent it me awhile, and I gave him use for it, a double heart for his single one. ...read more.

such great letters as they write 'Here is a good horse to hire' let them signify under my name 'Here you see Benedick the married man'... Each of the two know deep down that they do love each other and only when their friends plot against them do they end up declaring their love for each other. Benedick has protested in the past about loving Beatrice and we get this idea from this passage and numerous other passages throughout the play... Benedick: Love me? Why, it must be requited. I hear how I am censured: they say I will bear myself proudly, if I perceive the love come from her; they say to that she would rather die than give any sign of affection. Beatrice is also not happy about feeling love for Benedick and we get this feeling in the given passage... ...read more.

We can also tell from this part and the passage given the role of the women in deciding her fate and whom she marries. Claudio: I would scarce trust myself, though I had sworn the contrary, if Hero would be my wife From this passage we can see that women in the early 1600's had no authority and were given away to their husbands without a say in the situation. We mainly get this idea from the Hero and Claudio relationship, as during the play we learn nothing of Beatrice's father or mother. From the given passage and throughout the book we as the reader can make many judgements and have many thoughts on marriage and relationships in the 1600's. From the two main couples we learn of family values and expectations, we learn of different attitudes to love and we also learn of relationships between different couples and how they may of handled their affections. ...read more.