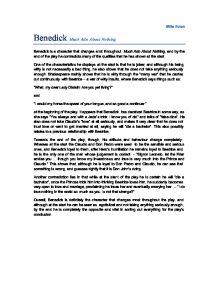 Much Ado About Nothing - Benedick

Mike Innes Benedick Much Ado About Nothing Benedick is a character that changes a lot throughout Much Ado About Nothing, and by the end of the play he contradicts many of the qualities that he has shown at the start. One of the characteristics he displays at the start is that he is joker; and although his being witty is not necessarily a bad thing, he also shows that he does not take anything seriously enough. Shakespeare mainly shows that he is witty through the "merry war" that he carries out continuously with Beatrice - a war of witty insults, where Benedick says things such as: "What, my dear Lady Distain! ...read more.

I know you of old" and talks of "false dice". He also does not take Claudio's "love" at all seriously, and makes it very clear that he does not trust love or want to get married at all, saying he will "die a bachelor". This also possibly relates to a previous relationship with Beatrice. Towards the end of the play, though, his attitude and behaviour change completely. Whereas at the start the Claudio and Don Pedro were seen to be the sensible and serious ones, and Benedick loyal to them, after Hero's humiliation he remains loyal to Beatrice and he is the only one of the men whose judgement is correct - "Signor Leonato, let the Friar advise you ... ...read more.

Another contradiction lies in that while at the start of the play he is certain he will "die a bachelor", once the Princes trick him into thinking Beatrice loves him, he suddenly becomes very open to love and marriage, proclaiming he loves her and eventually marrying her - "I do love nothing in the world so much as you. Is not that strange?" Overall, Benedick is definitely the character that changes most throughout the play, and although at the start he can be seen as egotistical and not taking anything seriously enough, by the end he is completely the opposite and vital in sorting out everything for the play's conclusion. ...read more.