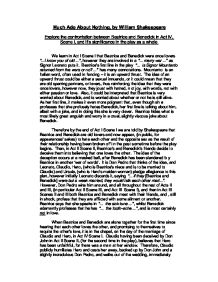 Much Ado About Nothing, by William Shakespeare. Explore the confrontation between Beatrice and Benedick in Act IV, Scene I, and it's significance in the play as a whole.

Much Ado About Nothing, by William Shakespeare Explore the confrontation between Beatrice and Benedick in Act IV, Scene I, and it's significance in the play as a whole We learn in Act I Scene I that Beatrice and Benedick were once lovers "...I know you of old ...", however they are involved in a "... merry war ..." as Signor Leonato puts it. Beatrice's first line in the play "... is Signor Mountanto returned from the wars or no? ..." has many connotations. Mountanto is an Italian word, often used in fencing - it is an upward thrust. The idea of an upward thrust could be either a sexual innuendo, or it could mean that they are old sparring partners, or lovers, thus reinforcing the idea that they were once lovers, however now, they joust with hatred, not joy, with words, not with either passion or love. Also, it could be interpreted that Beatrice is very worried about Benedick, and is worried about whether or not he is still alive. As her first line, it makes it even more poignant that, even though she professes that she profusely hates Benedick, her first line is talking about him, albeit with a joke, and in doing this she is very clever. ...read more.

Lady Beatrice ...". Beatrice does not want to be comforted by Benedick, she wants to concentrate her feelings solely on Hero. In this scene, Beatrice attacks the forced subservience of the female role in her society. In fact, at the time that Shakespeare was alive, women very much had to play a subservient role in society. She attacks it so much for many reasons, among the facts that she is most definitely not the stereotypical woman of her day, for, as I have just mentioned, they were meant to, and in some cases forced to accept a role of passiveness in social circles especially when men were present. Some of her stringer outbursts make full use of the type of speech known as the tricolon. Tricolons indicate much passion, emotion and anger, particularly inn Shakespeare's writing, for example "Sweet Hero! She is wronged, she is slandered, she is undone." Additionally, slightly earlier on in this scene, Beatrice uses the tricolon to take her anger out on Claudio - "... that hath slandered, scorned, dishonoured ..." Before this, somewhat earlier in the scene, Benedick says to Beatrice that she loves him, and that he loves her, and swears that he will "... make him eat it [Benedick's sword] that says I love you not ..." ...read more.

there is no real 'merry war' between the during this exchange, and (iii) Act IV Scene I is the point in the play where wordplay mutates into swordplay - Benedick promises to challenge Claudio, and does it, instead of just saying it. Benedick has to chose between words and actions, and men and women, and chooses actions and women, which is most unusual if you compare him to Don Pedro or Claudio, who would have probably chosen words and men. Also, Act IV Scene I is an unusual point in the play for Beatrice, because she is not Lady Disdain, (scornful and arrogant), but she is selfless and passionate, and Benedick, too, appears to lose some, (or all), of his vanity. This scene can be interpreted as the undoing of Don John, Don Pedro and Claudio, for it was Don Pedro's idea to deceive Benedick and Beatrice into thinking that one loved the other, and in this scene, they have formed an 'alliance', and Claudio will now be challenged as a result of this. For Don John, it is unlucky, because the truth is uncovered about his malicious deceptions, and it is Benedick who will think of some fit punishment for him: "... leave him 'till tomorrow. I'll think of some punishment for him.. Until then, let us dance! ...", and it is quite possible that this is because he is full of happiness that he will be married to Beatrice very soon. Richard Moore, CJK 4/3 U8 27.01.04 ...read more.