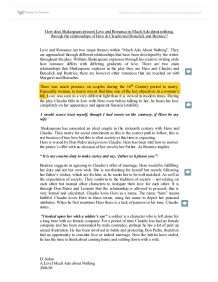 much ado about nothing critique

How does Shakespeare present Love and Romance in Much Ado about nothing, through the relationships of Hero & Claudio and Benedick and Beatrice? Love and Romance are two major themes within "Much Ado About Nothing". They are approached through different relationships that have been developed by the writer throughout the play. William Shakespeare expresses through his creative writing style how romance differs with differing gradients of love. There are two main relationships that Shakespeare explores in the play they are Hero and Claudio and Benedick and Beatrice, there are however other romances that are touched on with Margaret and Borrachio. There was much pressure on couples during the 16th Century period to marry. Especially woman, to marry was at that time one of the key objectives in a woman's life. Love was seen in a very different light than it is viewed in modern times. During the play Claudio falls in love with Hero even before talking to her, he bases his love completely on her appearance and apparent financial stability. I would scarce trust myself, though I had sworn on the contrary, if Hero be my wife" Shakespeare has presented an ideal couple in the sixteenth century with Hero and Claudio. They marry for social enrichment as this is the correct path to follow, this is not because of true love but this is what society at this time is expecting. ...read more.

"I will do myself the right to trust none; and the fine is, for the which I may go the finer, I will live a bachelor". Beatrice and Benedick both talk passionately of their mutual dislike of the opposite sex, thus between them there is an underlying passion. They keep up their guard with wit and the competition is furious between them, both trying to out wit, insult and out smart the other. They are both appearing to be vulnerable characters, both terrified of being publicly humiliated by the other one, to be opened up by the weakness of love. The couple defy the rules of society - breaking its rules. The audience asks whether their love would surface without society setting them up? Has Shakespeare created this joining just for comedy value, or has he brought them together to show the pressures on the young to marry early? I think that is just for the comedy value. Other characters in the play set the couple up- marriage is the ideal, and it presumed that Benedick and Beatrice need to be brought together, to be married ultimately will enhance their mutual respect in society. Beatrice and Benedick are more mature than a conventional relationship - and although it develops out of social pressure they are both two stubborn individuals. They are both very selective of who they hold close, but when intimate with characters they are both true to their love. ...read more.

Claudio was too wrapped up in his own image to see that he was walking into a trap. He publicly shames Hero to redeem his own standing- so that he could show that Hero has not humiliated him. Only once Hero's name has been cleared can he revert back to loving her... "Sweet Hero, now thy image doth appear; in the race semblance that I loved it first." Even when he first hears of her death he does not grieve her- not until her name is cleared, when suddenly he regains his love for her. Their love is superficial and it would have been accepted in sixteenth century Britain. In conclusion I believe that Shakespeare is trying to suggest that with society pressure to marry, it is making the act false and superficial. Beatrice and Benedick, who wait for love, will marry happily. Hero and Claudio's relationship will be less successful as Claudio does not have a realistic outlook on his marriage. He suggests to Don Pedro that he will accompany him to Aragon after his marriage. "I'll bring you thither, my lord" Don Pedro who is more mature refuses the offer. "Nay, that would be as great soil in a new gloss of your marriage" Don Pedro sees that it would be neglecting the marriage but the statement suggests Claudio does not see the marriage as a commitment and therefore it should not alter his lifestyle, but it was the correct thing to do. ...read more.

Shows some understanding of the two relationships, but lacking depth and development. There are a lot of disjointed points that need to be linked. Also, many of the quotations do not link to specific points but just seem to hang between paragraphs. It is better to incorporate quotations into the body of the paragraph and they should be textual support for points made. ***