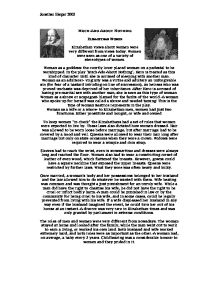 Much Ado About Nothing - Elizabethan Women

MUCH ADO ABOUT NOTHING ELIZABETHAN WOMEN Elizabethan views about women were very different from views today. Women were seen as one of a variety of stereotypes of women. Woman as a goddess- the courtly lover placed woman on a pedestal to be worshipped. In the play 'Much Ado About Nothing', Hero is treated as this kind of character until she is accused of sleeping with another man. Woman as an adulterer- virginity was a virtue and adultery an unforgivable sin (for fear of a bastard intruding on line of succession), an heiress who was proved unchaste was deprived of her inheritance. After Hero is accused of having pre-marital sex with another man, she is seen as this type of woman Woman as a shrew or scapegoat- blamed for the faults of the world. A woman who spoke up for herself was called a shrew and needed taming! This is the type of woman Beatrice represents in the play. Woman as a wife or a whore- to Elizabethan men, women had just two functions. Either prostitute and bought, or wife and owned To keep women "in check" the Elizabethans had a set of rules that women were expected to live by. These laws also dictated how women dressed. Hair was allowed to be worn loose before marriage, but after marriage had to be covered by a hood and veil. Queens were allowed to wear their hair long after marriage but only on state occasions when they wore a crown. Widows were required to wear a wimple and chin strap. Sleeves had to reach the wrist, even in summertime and dresses were always long and reached the floor. Women also had to wear a constricting corset of leather of even wood, which flattened the breasts. However, gowns could have a square neckline that exposed the upper breasts. Queens were restricted by further laws. What they wore was often heavy and bulky. ...read more.

the pipe: I have known when he would have walked ten mile afoot, to see a good armour, and now will he lie ten nights awake carving the fashion of a new doublet: he was wont to speak plain, and to the purpose (like an honest man and a soldier) and now is he turned orthography- his words are a very fantastical banquet, just so many strange dishes" (2.3.12-20). He is sad that is friend is going to get married and has seen how love has changed Claudio from a simple soldier into a poetical devotee to love. "That a woman conceived me, I thank her: that she brought me up, I likewise give her my most humble thanks... I will do myself the right to trust none... I will live a bachelor" (1.1.208-215). This statement from Benedick shows that he is ignorant, in the sense that he doesn't know that women are different from one another. It may also indicate that something in his past has made him suspicious of women. From Beatrice's conversation in act 2, scene 1, we know that Benedick has had a relationship with Beatrice. Could it be this that is causing him to be suspicious of women? Benedick's change after hearing that Beatrice loves him is as sudden as Beatrice's although he is more sceptical of what he has heard. His conversation with himself, after he has heard that Beatrice loves him reveals to us that he did not mean what he said about marriage- "When I said that I would die a bachelor, I did not think that I would live till I were married" (2.3.224-226) Our first impressions of Claudio are from what Beatrice says about him. He is noble and Beatrice seems to think well of him. The first thing Claudio says is "Benedick, didst thou note the daughter of Signior Leonato?" (1.1.140-141). From this, we can tell that Benedick is one of Claudio's friends; otherwise he wouldn't be asking him a question of that context. ...read more.

The shocked Benedick refuses. Angrily, Beatrice denounces Claudio's savagery, saying that if she were a man, she would kill him herself for his slander of her cousin and the cruelty of his trick. Beatrice rebels against the unequal status of women in Renaissance society. "O that I were a man for his sake! Or that I had any friend would be a man for my sake..." (4.1.310-311), she passionately exclaims, "I cannot be a man with wishing, therefore I will die a woman with grieving" (4.1.316-317). After listening to her, Benedick changes his mind and soberly agrees to challenge Claudio-for the wrong that he has done to Hero, and for Beatrice's sake. Lots of close ups are used in this scene so that we can see the reactions of the characters towards one another and their facial expressions. Claudio particularly used physical anger and strong facial expressions to show the audience how upset he is. The 'good guys' (Claudio, Benedick, Don Pedro and the other soldiers) are all wearing their uniform with blue collars and blue trousers. However, Don John is wearing a black collar and a black pair of trousers. Borachio also wears black clothing throughout the film. This could be to tell us that they are the 'bad guys' and troublemakers. There are lots of reddish scenes at the start of this scene. Red represents blood, anger, intense emotion and pride. This could be a representation of what is to come. Lots of members of the congregation are wearing white. White is symbolic of purity as well as weddings. This could symbolise Hero's innocence. The clothing that the actors wear is not suitable for the period of time that the film is set in. Elizabethan views about women would mean that the women are not allowed to wear short sleeves but in the film, the women wear short sleeves. This may be to reflect to the audience that the wedding is set in summertime. ?? ?? ?? ?? Jonathan Harper 2002 ...read more.