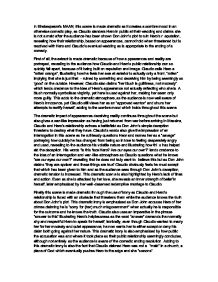 Much Ado about Nothing Extract - 1st wedding

In Shakespeare's MAAN, this scene is made dramatic as it creates a sombre mood in an otherwise comedic play, as Claudio slanders Hero in public at their wedding and claims she is not a maid after the audience has been shown Don John's plot to ruin Hero's reputation, revealing how their relationship, based on appearances, cannot hold when threatened but is resolved with Hero and Claudio's eventual wedding as is appropriate to the ending of a comedy. First of all, the extract is made dramatic because of how appearances and reality are portrayed, revealing to the audience how Claudio and Hero's public relationship can so quickly fall apart, because of it being built on reputation and image. Claudio calls Hero a "rotten orange", illustrating how he feels her sweet exterior is actually only a front, "rotten" implying that she is just that - ruined by something and deceiving him by being seemingly so 'good' on the outside. ...read more.

Claudio's words also give the impression of an interrogation in this scene as he ruthlessly questions Heor and names her as a "savage" portraying how quickly he has changed from being so in love to feeling desperately angry and used, revealing to the audience his volatile nature and illustrating how this has helped aid the deception. His words "is this face Hero? Are our eyes our own?" lends credence to the idea of an interrogation and war-like atmosphere as Claudio questions what he knows "are our eyes our own?" revealing that he does not truly want to believe this but as Don John claims "they are spoken and these things are true" Claudio obviously feels he must accept that which has been given to him and as the audience sees through Don John's deception, dramatic tension is increased. ...read more.

This dramatic irony is also emphasised by how public the accusation was and where it took place as their public relationship seemingly concludes, although not entirely as the audience is aware of the comedic ending resolution. Adding to this dramatic irony is also the fact that Claudio claimed Hero was not a "maid" in a church, a place of God which eventually pushes Hero to the edge and she "swoons". This scene is made dramatic as Hero and Claudio's relationship is faced with a war-like attack and revealed to be based on the images they have been given, ironically as the audience knows what has transpired and thus creating a dramatic yet sombre mood. Careful, insightful, detailed analysis, fully focussed on question. -needs to keep sentences shorter and clearer -who else is watching / listening? -try to link discussion briefly, to more events occurring later on. Top Band 2. ...read more.