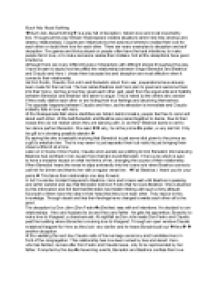 &quot;Much Ado About Nothing&quot; is a play full of deception, hidden love and most importantly lies

Much Ado About Nothing ?Much Ado About Nothing? is a play full of deception, hidden love and most importantly lies. Throughout the play William Shakespeare creates situations where lies help develop and destroy relationships. Couples are influenced by the actions of others to realise their love for each other or doubt their love for each other. There are many examples to deception and self deception. The games and tricks played on people often have the best intentions, to make people fall in love, or to make someone realise their mistake. Not all the deceptions have good intentions. Although there are many different types of characters with different stories throughout the play, I have chosen to study how lies affect the relationship between Singor Benedick and Beatrice and Claudio and Hero. I chose them because lies and deception are most affective when it comes to their relationship. As Don Pedro, Claudio, Don John and Benedick return from war, preparations have already been made for their arrival. ...read more.

By saying this she is basically implying that Benedick is just some idiot given to the prince as a gift to entertain him. The lie may seem to just separate them but really its just bringing them closer a little bit at a time. Later on in Scene 3 Don Pedro, Claudio and Leonato are plotting to trick Benedick into believing Beatrice had confined in her cousin Hero that she loved Benedick. This is a lie which is sure to have a massive impact on what he thinks of her, changing the course of their relationship. When Benedick hears the news he slips awkwardly into the lovers role when Beatrice comes to call him for dinner and thanks her with a regular verse line:  �Fair Beatrice, I thank you for your pains.� This takes their relationship one step forward. ...read more.

This relationship has now been ruined by lies and deceit. Hero, who has fainted, revives after Don Pedro and Claudio leave, only to be reprimanded by her father. Prompted by the day�s haworring events, Benedick and Beatrice confess their love for each other. Beatrice then asks Benedick to slay Claudio. �Kill Count Claudio.� She said.                  �Ha! Not for the wide world.� Replied Benedick. Beatrice leaves with a feeling of rejection. The Friar believes Hero to be innocent and convinces the family to fake Hero�s death in order to extract the truth and Claudio�s remorse. When the truth of the deceit about Hero comes to light, Claudio is devastated and believing Hero is dead agrees to marry a cousin of hers. During Claudio�s second wedding, the �cousin� is unmasked as Hero to a most surprised and pleased Claudio. Beatrice and Benedick, prompted by their friends interference finally confess their love for each other to the group at large. Overlooking the whole play lies destroy relationships and mend them. They bring true feelings to light which may have never survaced. ...read more.