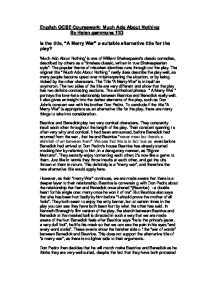 Much Ado About Nothing - Is the title, &quot;A Merry War&quot; a suitable alternative title for the play?

English GCSE Coursework: Much Ado About Nothing By Helen gammons 11D Is the title, "A Merry War" a suitable alternative title for the play? 'Much Ado About Nothing' is one of William Shakespeare's classic comedies, described by others as a "timeless classic, written in true Shakespearian style". The popular theme of mistaken identities runs through out the play. The original title " Much Ado About Nothing " really does describe the play well, as many people become upset over misinterpreting the situation, or by being tricked by the other characters. The Title "A Merry War" is in itself an oxymoron. The two sides of the title are very different and show that the play has two definite contrasting sections. The antithetical phrase " A Merry War " portrays the love-hate relationship between Beatrice and Benedick really well. It also gives an insight into the darker elements of the play, such as Don John's constant war with his brother Don Pedro. To conclude if the title "A Merry War" is appropriate as an alternative title for the play, there are many things to take into consideration. Beatrice and Benedick play two very comical characters. They constantly insult each other throughout the length of the play. Their constant sparring is often very witty and comical. It had been announced, before Benedick had returned from the war , that he and Beatrice "never meet but there's a skirmish of wit between them". ...read more.

Everyone is happy that they have finally found each other and also know that the humorous "war of words" will continue. The more comical side of the play is where Don Pedro gets both Beatrice and Benedick to overhear conversations spoken by their friends. The staging for Benedick could add a lot of humour as one way of staging it would be to have Benedick stuck behind a bush, constantly bobbing up and down as he hears of Beatrice's love for him, and also the staging of Leonato and the other conspirators blatantly leaning over to him and whispering as loudly a possible in the direction of where Benedick is hiding, this creates a maximum comical affect making the audience more engaged with the characters in the scene. This is also another of the "merry" sides to the play. However, the happiness is short lived. Beatrice demands that Benedick must fight Claudio to protect Hero's (her cousin's) honour. This is an excruciating task for Benedick to carry out, as he and Claudio have been good friends for a long time. Benedick refuses to challenge Claudio, and this causes pain for both Benedick and Beatrice. This brings more emphasis to the war side of "a merry War". In the end, however, the play ends on a happy note, with the two weddings (Claudio and Hero, Benedick and Beatrice), also the villains (Don John and his friends) ...read more.

At the wedding Hero falls to her knees and faints, and for the sake of her honour is later pronounced dead. This upsets Beatrice immensely as she is Hero's cousin and they have been friends for a long time. All hope is not lost though; Leonato discovers the truth of his daughter and tries to get her back with Claudio. Claudio, after hearing of the death of his fianc�e, agrees to marry Leonato's " niece". Don John's plan is then exposed to all the people around him and he is sent away to be punished. The story ends with a happy scenario, with a joint wedding and many celebrations. This also adds emphasis on the merry side of the "war". In conclusion, despite the malicious actions of Don John and his associates (Borachio and Conrade), I think that the title " a merry war" would be a suitable alternative title for the play, as it really does describe the love-hate relationship of Beatrice and Benedick. It also does refer to some of the dark elements as it mentions war. Overall I feel that the play definitely is a merry war as it is described as a romantic comedy. It starts happily and ends with a 'happy ever after' scenario and that counteracts the quite serious events that take place in the middle, where Claudio, Hero, Beatrice and Leonato are severely hurt due to the trickery of the evil Don John. The end scene really does bring back the merry element as the star-crossed lovers finally get together, and the "villains" are taken away. ...read more.