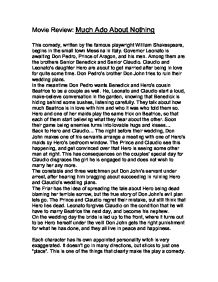 Much ado about nothing Movie review

Movie Review: Much Ado About Nothing This comedy, written by the famous playwright William Shakespeare, begins in the small town Messina in Italy. Governor Leonato is awaiting Don Pedro, Prince of Aragon, and his men. Among them are the brothers Senior Benedick and Senior Claudio. Claudio and Leonato's daughter Hero are about to get married after being in love for quite some time. Don Pedro's brother Don John tries to ruin their wedding plans. In the meantime Don Pedro wants Benedick and Hero's cousin Beatrice to be a couple as well. He, Leonato and Claudio start a loud, make-believe conversation in the garden, knowing that Benedick is hiding behind some bushes, listening carefully. They talk about how much Beatrice is in love with him and who it was who told them so. Hero and one of her maids play the same trick on Beatrice, so that each of them start believing what they hear about the other. Soon their game being enemies turns into lovable hugs and kisses... Back to Hero and Claudio... ...read more.

On the wedding day the bride is led up to the front, where it turns out to be Hero herself under the veil! Don John gets the right punishment for what he has done, and they all live in peace and happiness. Each character has its own appointed personality witch is very exaggerated. It doesn't go in many directions, but sticks to just one "place". This is one of the things that clearly make the play a comedy. There are also very many funny scenes in the movie that make you laugh. The story also ends happy. Here are some of the main characters: Beatrice: She is a clever woman who isn't afraid of saying her opinions out loud. She believes that Hero is honest about herself and that she hasn't cheated on her beloved. Beatrice realizes that she does have feelings for Senior Benedict and marries him at the end. Hero: This young lady is engaged to Senior Claudio (Senior Benedick's brother). ...read more.

His quiet and unhappy life makes him want to ruin Claudio and Hero's wedding plans. At the end he is punished for his evil doings. "Much Ado About Nothing" was a movie I didn't like so much. It also wasn't the worst movie I've ever seen, but I kind of didn't feel that enthusiasm when I watched it on the big screen. Some parts were a bit funny, and the story was also ok. I just didn't get pulled into the scenes when the different characters talked old English in the movie. It would have been fine for me to see it on stage instead. The atmosphere there is more alive than on a plain old screen! The story didn't get carried straight through the movie because of the peoples' way of talking. I also think that there should have been more action and happenings in the movie instead of so many unnecessary conversations! Therefore I give the movie a "C" (3/4). Little children wouldn't understand the form of language in this play. Many older people like grandparents would enjoy it more than young teenagers, I think.... Katharina Susanna Berning 10b ...read more.