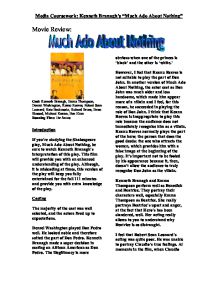 Much Ado About Nothing - movie review.

Movie Review: Cast: Kenneth Branagh, Emma Thompson, Denzel Washington, Keanu Reeves, Robert Sean Leonard, Kate Beckinsale, Richard Briers, Brian Blessed, Michael Keaton, Ben Elton Running Time: 1hr 5mins Introduction If you're studying the Shakespeare play, Much Ado About Nothing, be sure to watch Kenneth Branagh's interpretation of this play. This film will provide you with an enhanced understanding of the play. Although, it is misleading at times, this version of the play will keep you fully entertained for the full 111 minutes and provide you with extra knowledge of the play. Casting The majority of the cast was well selected, and the actors lived up to expectations. Denzel Washington played Don Pedro well. He looked noble and therefore suited the part of Don Pedro. Kenneth Branagh made a super decision in casting an African American as Don Pedro. The illegitimacy is more obvious when one of the princes is 'black' and the other is 'white.' ...read more.

She really portrays Beatrice's upset and anger, at the fact that Hero's has been slandered, well. Her acting really allows to you to understand why Beatrice is so distraught. I feel that Robert Sean Leonard's acting was quite poor. He was unable to portray Claudio's true feelings. At moments in the film, when Claudio was supposed to be really worried and upset, Robert Sean Leonard made it seem as if Claudio was just pretending to be upset. This gives a false impression to the audience who may think that Claudio was not actually concerned. However, in the wedding scene, he portrayed Claudio's anger, brilliantly. It really allowed the audience to see why Claudio would be so angry about being deceived. Dogberry was played by Michael Keaton, who I feel did a brilliant job in depicting Dogberry as the village idiot. I feel he was really able to show that Dogberry was meant to be stupid, and this was done well in the scenes where Dogberry and Verges galloped around on imaginary horses. ...read more.

I feel this works really well because it sets the film up and unites the beginning of the play to the subject of the play, deception. It also builds on Beatrice's character. Beatrice reads the poem with emotion, which implies that Beatrice, herself, has once been deceived. Slow motion is used at the beginning of the play, when the soldiers are riding up to the villa. This focuses on them and makes their return seem really significant. The soldiers return as war heroes and by filming their return in slow motion, it really demonstrates that to the audience. When Don Pedro, Claudio and Leonato deceive Benedick about Beatrice's intentions for him, it isn't as serious as it is supposed to be. In the play, Shakespeare wrote the deception scene to be serious, but in the film, Don Pedro, Claudio and Leonato treat it as a joke. They shout to each other and smirk a lot, which removes the seriousness of the scene. Media Coursework: Kenneth Branagh's "Much Ado About Nothing" ...read more.