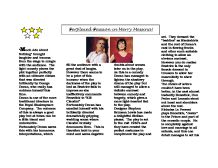 Much Ado About Nothing - Prefered passion in merry messina!

"Much Ado About Nothing" brought laughter and trauma from the stage to mingle with the audience. The light comedy pieces the plot together perfectly with an ultimate climax that was directed brilliantly by George Doran, who really has outdone himself this time. Doran is one of the more traditional directors in the Royal Shakespeare Company. The outcome of this is always a good play but at times can be a little bland and uninventive. Fortunately Doran saves this with his humerous interpretations, which fill the audience with a great deal of laughs. However there seems to be a price of this humour when the darkness of the play is lost as Beatrice fails to impress as she ineffectively commands Benedick to "Kill Claudio!" Fortunately Doran has excelled himself with his brilliantly directed dramatically gripping wedding scene where Claudio brutally denounces Hero. This is therefore held in your mind and saves negative doubts about scenes later on in the play. As this is a comedy Doran has managed to lighten the shadowy drama of the play but still managed to allow a definite contrast between comedy and tragedy, which gives a more light-hearted feel to the play. ...read more.

However there wasn't such a connection between Le Prevost and Walters (Beatrice). This unfortunately managed to take humour away from the catty fights between the two characters creating a sense of disappointment in the audience. Beatrice, who was played by Harriet Walter, I felt was rather disappointing. Both Benedick and Beatrice seemed too old but this affected Beatrice more so because of the age difference between her and Hero. Walter over exaggerated and this led her to be more masculine than I felt necessary. I found her continuous fidgeting distracting and although she was very impressive and emotionally touching when all alone she declares, "Benedick love on, I will requite thee!" this genius lacked in most scenes. The couple just didn't seem to relate with one another and this lead to questions such as, "Do they really love each other?" On the other hand we had Claudio and Hero played by John Hopkins and Kirsten Parker. This romantic couple gelled together perfectly and had the exact image one would expect of a romantic Shakespearean couple. ...read more.

Unfortunately there were also the weaker characters. Dogberry in the play is described as "too cunning to be understood." This line is also appropriate for the actor. He was speaking well-written, cunningly funny lines, but he mumbled and spoke so fast he couldn't be understood. Another weak link in the chain of actors I felt was Stephen Campbell-Moore who played Don John. He made this character appear almost too melancholy and sinister. "Much Ado About Nothing" was well directed but lacked that little something in certain areas. On the whole it was good but in places was a little bland. The ending of the play was well rounded and well performed. The chemistry between actors was shown and so was the light-heartedness of the play. On the whole it was a well performed and directed Shakespearean play. This has always been one of Shakespeare's amazing scripts and the direction and several of the characters did it justice but a few of the actors could have been better than they were. Doran's ideas were superb and he fulfilled his job as director well, allowing humour to shine through between the confusion and trauma. Reviewed by Lizzie Gilthorpe ...read more.