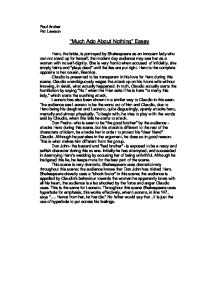 Paul Archer Pat Lawson "Much Ado About Nothing" Essay Hero, the bride, is portrayed by Shakespeare as an innocent lady who can not stand up for herself, the modern day audience may see her as a woman with no self-dignity. She is very frantic when accused of infidelity, she simply faints and "plays dead" until the lies are put right. Hero is the complete opposite to her cousin, Beatrice. Claudio is presented to be transparent in his love for Hero during this scene; Claudio unambiguously wages the attack upon his future wife without knowing, in detail, what actually happened. ...read more.

The audience see Leonato to be the worst out of him and Claudio, due to Hero being his daughter and Leonato, quite disgustingly, openly attacks hero, mentally and almost physically. To begin with, he tries to play with the words said by Claudio, when this fails he starts to attack. Don Pedro- who is seen to be "the good brother" by the audience- attacks Hero during this scene, but his attack is different to the rest of the characters criticism, he attacks her in order to protect his "dear friend" Claudio. ...read more.

This scene is very dramatic. Shakespeare uses dramatic irony throughout this scene; the audience knows that Don John has tricked Hero. Shakespeare cleverly uses a "shock factor" in this scene; the audience is appalled by Claudio's behaviour towards the woman he apparently loves with all his heart, the audience is also shocked by the force and anger Claudio uses. This is the same for Leonato. Throughout this scene Shakespeare uses hyperbole for emphasis, this works effectively, when Leonato, in line 147, says ".... Hence from her, let her die." No father would say that, it is just the use of hyperbole to put across his feelings. ...read more.