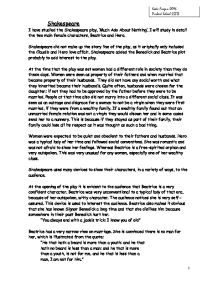 'Much Ado About Nothing' - study in detail the two main female characters, Beatrice and Hero.

Shakespeare I have studied the Shakespeare play, 'Much Ado About Nothing'. I will study in detail the two main female characters, Beatrice and Hero. Shakespeare did not make up the story line of the play, as it originally only included the Claudio and Hero love affair. Shakespeare added the Benedick and Beatrice plot probably to add interest to the play. At the time that the play was set women had a different role in society than they do these days. Women were seen as property of their fathers and when married that became property of their husbands. They did not have any social worth and what they inherited became their husband's. Quite often, husbands were chosen for the daughter; if not they had to be approved by the father before they were to be married. People at that time also did not marry into a different social class. It was seen as an outrage and disgrace for a woman to not be a virgin when they were first married, if they were from a wealthy family. If a wealthy family found out that an unmarried female relation was not a virgin they would disown her and in some cases send her to a nunnery. ...read more.

This is fierce loyalty towards Hero. She has no doubt in her faith that Hero is innocent. "Sweet Hero, she is wronged, she is slandered, she is undone." She is very frustrated in not being able to take revenge on Claudio herself because of social restrictions on her because she is a women, even though she is driven by her strong belief and loyalty to Hero. "O God that I were a man! I would eat his heart in the market place." Benedick is taken back by the request from Beatrice to kill Claudio. He replies, "Ha, no for the wide world," because he refuses to kill him. His refusal is based on the fact that he is suspicious of the accusation: "Two of them have the very bent of honour. The practise of it lives in John the bastard. And if their wisdoms be misled in this," Beatrice refuses his love, as she believes that if he loved her then he would do that for her. She says, "You kill me to deny it?" Beatrice is very embarrassed to admit her feelings towards Benedick. When Benedick asked her in public, "Do you not love me?" She denies her true feelings, "Why no, no more than the reason." ...read more.

Beatrice and Hero, although very different in character, are very close friends and have a close trusting, loyal friendship. Also it is shown that they want the best for each other. Hero is sensitive and affected by other people's opinions of her. When she faints it shows the weakness in her character. She also seems unable to support herself. For these reason I sympathise with her. However, she is a product of the time the play was written and therefore cannot be criticised by a modern audience, which would expect more from her. I feel Beatrice is more like the women of today. Her independent personality shows her inner strength and her unconventional character. I admire her most, as she is different to most women in Shakespeare's time. She shows a wider range of responses throughout the play, being confident and also vulnerable at times. This variety would hold the attention of a Shakespearean audience as it does a modern one. However, I also admire Hero's optimism about the future. I think that the play demonstrates the contrast between women of today and the women of Beatrice and Hero's era. The contrast is brought alive in the play by a modern style woman's character being used along side a typical woman of the era. 1 ...read more.