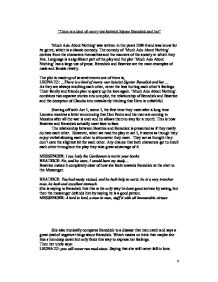 "There is a kind of merry war betwixt Signor Benedick and her" 'Much Ado About Nothing' was written in the years 1598-9 and was know for its genre, which is a classic comedy. The comedy of 'Much Ado About Nothing' derives from the characters themselves and the manners of the society in which they live. Language is a significant part of the play and the plot 'Much Ado About Nothing' has a large use of prose. Benedick and Beatrice are the main examples of male and female rivalry. The plot is made up of several events one of them is, LEONATO: ...There is a kind of merry war betwixt Signior Benedick and her.... As they are always insulting each other, never the less hurting each other's feelings. Their family and friends plan to spark up the love again. 'Much Ado About Nothing' combines two separate stories into one plot, the relationship of Benedick and Beatrice and the deception of Claudio into mistakenly thinking that Hero is unfaithful. Starting off with Act 1, scene 1, the first time they meet after a long time Leonato receives a letter announcing that Don Pedro and his men are coming to Messina after all the war is over and he allows them to stay for a month. This is how Beatrice and Benedick actually meet face to face. The relationship between Beatrice and Benedick is presented as if they really do hate each other. ...read more.

BEATRICE: A dear happiness to women, they would else have been troubled with a pernicious suitor.... Benedick is unable to compete with her wit as she doesn't physically hit him but only with words and they finally break off the conversation. Beatrice says that a combination between Don John and Benedick would create the perfect man, one who spoke just enough. Leonato tells Beatrice she will never get a husband if she continues to make such "shrewd" remarks. LEONATO: You must not, sir, mistake my niece. There is a kind of merry war betwixt Signior Benedick and her: they never meet but there's a skirmish of wit between them. Beatrice acknowledges that she is happy without a husband and plans to die a spinster. Benedick meets up with Beatrice at the masked ball and refuses to reveal who he is. She starts to talk about Benedick, calling him. BEATRICE: the Prince's jester, a very dull fool. Benedick has been stung by what Beatrice said about him while they danced, and the he tries to tell Don Pedro what she said that hurt him. He is mostly upset because she called him the "Prince's jester", yet he ironically confirms this accusation by comically re-enacting the scene for Don Pedro. Beatrice arrives with Hero, Claudio and Leonato. Benedick leaves as soon as he sees her, unable to bear her comments any longer. ...read more.

There is a civilized conversation between Beatrice and Benedick for the first time. Benedick tries to cheer Beatrice as she is upset and they pronounce their love in a sad situation, which is a major development in their relationship however Beatrice becomes very ruthless and asks Benedick to, BEATRICE: ...kill Claudio. After this is said it comes as a shock to most of the audience as we did not realise that the plot would develop such calamitous consequences. He agrees to the plan for his love to Beatrice, BENEDICK: Yet, by mine honour, I will deal in this. In this conversation the language is very clever as there is a lot of banter as when they are squabbling, this scene take the whole plot in a new direction to whether if he will go ahead with it or not. Overall I bit by bit their attitude towards each other had changed and we saw a completely new side towards them, which was more sensitive. Their personalities are also similar which bought them closer to each other. These two characters demonstrate the expression "the course of true love never did run smooth." Which Lysander says in A Midsummer Night's Dream, another comedy. Sometimes, when a man and a woman are interested in each other, they pretend to feel exactly the opposite. Both of them experience a very similar sequence of events, and both come to realize their love for each other through tricks played upon them by a social conspiracy to make them marry. ...read more.