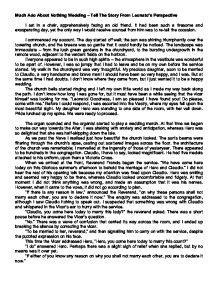 Much Ado About Nothing Wedding Tell The Story From Leonatos Perspective

Much Ado About Nothing Wedding - Tell The Story From Leonato's Perspective I sat in a chair, apprehensively facing an old friend. It had been such a tiresome and exasperating day, yet the only way I would receive counsel from him was to re-tell the occasion. I commenced my account. The day started off well; the sun was shining triumphantly over the towering church, and the breeze was so gentle that it could hardly be noticed. The landscape was immaculate - from the lush green gardens in the churchyard, to the bursting undergrowth in the remote wood, adjacent to the verdant fields on the horizon. Everyone appeared to be in such high spirits - the atmosphere in the vestibule was wonderful to be apart of. However, I was so jumpy that I had to leave and be on my own before the service started. My walk in the churchyard was very thoughtful. My precious daughter, soon to be married to Claudio, a very handsome and brave man! I should have been so very happy, and I was. But at the same time I had doubts. ...read more.

At that moment I did not think anything was wrong, and made an assumption that it was his nerves. However, when it came to the vows, it did not go according to plan. "If there is any reason in law," announced the Reverend, "on why these persons shall not marry each other, you are to declare it now." The enquiry was addressed to the congregation, although I saw Claudio itching to speak out. I suspected that something was wrong with Claudio and whispered in the Vicar's ear to hurry with the service. "Claudio, you come here today to marry this lady?" the reverend asked. There was a short pause before he answered the Vicar's question. "No." There was a wave of confusion that carried its way across the room, and I ended up breaking the silence by correcting the vicar. "To be married to her, reverend," and then signalling him to carry on with the service, despite the puzzled expression on his face. This time the Vicar addressed Hero, "Hero, you come here today to marry this count?" "I do" answered Hero. Perhaps there was a slight sigh of relief when she replied, but by no means was it over yet. ...read more.

Reverend Francis, who had been silent all that time, believed Hero to be innocent, and came up with a plan to prove his opinion to make Hero and Claudio together again. I don't know how he managed it, but somehow he changed my assumption to one that went along with his plan. The plan involved pretending that Hero was dead when she had in fact fainted. Claudio would then feel sorry when he hears that she is dead and they will come together again. Alas, there is still a chance that she is guilty. Beatrice and Benedick thought that they had been left alone when everyone else had left the church, but I was in there too, and wanted to reflect and spend some time alone. However, when I saw them together, I surreptitiously hid myself behind a pillar, wanting to see what happened. The next few minutes passed very swiftly. As well as Benedick, Beatrice was convinced of Hero's innocence. However, Beatrice was very hating of Claudio for the manner in which he 'exposed' her friend, whilst Benedick thought there had been a misunderstanding, and understood why Claudio felt aggrieved and why he humiliated Hero so publicly. Somehow, they ended up confessing their love for one another, and Beatrice asked Benedick to kill Claudio. ...read more.