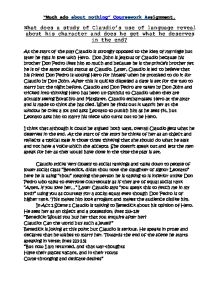 &quot;Much ado about nothing&quot; - What does a study of Claudio's use of language reveal about his character and does he get what he deserves in the end?

"Much ado about nothing" Coursework Assignment. What does a study of Claudio's use of language reveal about his character and does he get what he deserves in the end? At the start of the play Claudio is strongly opposed to the idea of marriage but later he falls in love with Hero. Don John is jealous of Claudio because his brother Don Pedro likes him so much and because he is the prince's brother yet he is of the same social status as Claudio. Later, Claudio is led to believe that his friend Don Pedro is wooing Hero for himself when he promised to do it for Claudio by Don John. After this is quickly dispelled a date is set for the two to marry but the night before, Claudio and Don Pedro are taken by Don John and tricked into thinking Hero has been un-faithful to Claudio when they are actually seeing Borachio and Margaret. Claudio embarrasses Hero at the altar and is made to think she has died. When he finds out it wasn't her at the window he cries a lot and asks Leonato to punish him as he sees fit, but Leonato asks him to marry his niece who turns out to be Hero. I think that although it could be argued both ways, overall Claudio gets what he deserves in the end. ...read more.

In act 2 scene 1 Claudio is tricked for the first time by Don John. This shows that Don John doesn't like Claudio and might try again. He speaks in prose to start off with because he's pretending to be Benedick. Later (128-138) when he performs a soliloquy he speaks in verse again. He is very quick to believe Don John and to believe Don Pedro has betrayed him, this shows he is gullible and that he is very mistrusting. In Act 3 Scene 2 when Don John tells him that Hero is disloyal he believes him immediately and makes up his mind that he will shame her at the altar before he has seen any proof: lines 92-93 "If I see anything tonight, why I should not marry her tomorrow in the congregation, where I should wed, there I will shame her." this reinforces how gullible he is and you could argue that he doesn't really love her if he trusts someone who has tricked him before instead of his potential wife. By the End of Act 4 scene 1 the audience do not like Claudio at all. This is partly Hero's fault for being so pathetic as all the time he stands there accusing her of being a whore she doesn't stand up for herself and lets him carry on. ...read more.

He says "done to death by slanderous tongues"- line 3 - meaning that it was his fault and that everything he said was wrong. The audience begins to like him again and start to feel sorry for him because he has been tricked into all of this. The phrase "Lives in death with glorious fame" shows that he still loves her even after all that happened. In act 5 scene 4 Claudio starts of on line 53 saying "which is the lady I must seize upon" which has some of his old arrogant ways showing through but it could also mean he doesn't want to because he still loves Hero. On line 59 he says " I am your husband if you like of me" which I think is important because he is actually giving her, a woman, a choice which she wouldn't have had in those times if her father told her to marry someone she would have to do it. This is in great contrast to the start of the play when Claudio sticks very closely to social status. I think overall he does change as the play progresses. He goes from being arrogant to being a little sorry and eventually becoming quite nice and deserving Hero who hasn't really done anything wrong except be the typical pathetic woman of her time. ...read more.