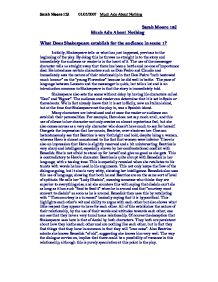 Much Ado About Nothing - What Does Shakespeare establish for the audience in scene 1?

Sarah Moore 12J Much Ado About Nothing What Does Shakespeare establish for the audience in scene 1? Initially, Shakespeare tells us what has just happened, previous to the beginning of the play. By doing this he throws us straight in to the story and immediately the audience or reader is in the heart of it. The use of the messenger character tells us straight away that there has been a battle and no one of importance died. He introduces certain characters such as Don Pedro and Claudio and immediately sets the nature of their relationship in that Don Pedro "hath bestowed much honour" on the "young Florentine" because he did well in battle. The pace of language between Leonato and the messenger is quick, but tells a lot and is an introduction common to Shakespeare in that the story is immediately told. Shakespeare also sets the scene without delay by having his characters called "Don" and "Signor". The audience and reader can determine that it is set in Spain or thereabouts. We in fact already know that it is set in Sicily, now an Italian island, but at the time that Shakespeare set the play in, was a Spanish island. Many characters are introduced and at once the reader or audience can establish their personalities. For example, Hero does not say much at all, and this use of silence in her character not only creates an almost mysterious feel, but she also comes across as a very shy character who doesn't have much to say for herself. ...read more.

Also Beatrice admits she knows Benedick "of old", suggesting she knows him very well. The way the dialogue carries on, implies that there could be a possibility of romance in this relationship, although this is purely speculation at this point in the play. Don John is Don Pedro's bastard brother and in this scene the first introduction to him is also not very descriptive or suggestive of what his character is like. Leonato acknowledges him by being welcomed and glad he is "reconciled to the Prince" his brother. He speaks only a few words, but in that time, the reader or audience can establish that perhaps he is still slightly resentful for whatever reason they had fallen out and not entirely satisfied. Also in Shakespeare's plays, the bastard is generally the villain, so this character has already been given a stereotypical label. Claudio is very silent in the presence of people superior to him, for example Leonato and Don Pedro, but as they leave he immediately asks, "Benedick, didst thou note the daughter of Signor Leonato?" This immediately shows the respect he has for people he considers senior to him. He also leads the audience or reader to believe that he is very wary of what people may think of him, but asking Benedick what he thinks of Hero in his "sober judgement". ...read more.

Claudio instantly recognises his lower standing to Don Pedro by calling him "my liege, your highness" and asking him for help. Don Pedro indicates that he loves Claudio and will do anything he can to help him. We then establish ulterior motives that Claudio has for Hero as he asks if Leonato "hath...any son". This introduces the fact that Claudio wants a wealthy life-style and realises he could probably have it if he marries Hero. Don Pedro assures that she is the "only heir", but asks if Claudio cares for hero too. Claudio says that before he went to war, he saw her and liked her, but he was pre-occupied with military thoughts, but now there is room to consider his affections. This establishes that Claudio has good intentions too. Don Pedro said that he would try and help out Claudio, by perhaps speaking to Hero, but he shies away from this idea. The plot then thickens as Don Pedro offers to go in disguise to the party that night and "unclasp" his heart to her and win her affections. It is then established the story of the romantic trail this would take, in that Hero would love Claudio by the words Don Pedro uses, but in fact it would be Don Pedro there. The pace of the scene is quite constant with a bantering nature written mainly in prose until the final part when it takes the more serious tone between Claudio and Don Pedro. Sarah Moore 12J 01/05/2007 Much Ado About Nothing ...read more.