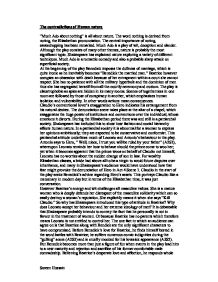 Much Ado is a play of wit, deception and slander. Although the play consists of many other themes, nature is probably

The contradictions of Human nature "Much Ado about nothing" is all about nature. The word nothing is derived from noting, the Elizabethan pronunciation. The central importance of noting, eavesdropping has been remarked. Much Ado is a play of wit, deception and slander. Although the play consists of many other themes, nature is probably the most significant topic. Shakespeare has explained nature exploring a variety of different techniques. Much Ado is a romantic comedy and also a probable sharp attack on superficial society. At the beginning of the play Benedick imposes the dullness of marriage, which is quite ironic as he inevitably becomes "Benedick the married man." Beatrice however occupies an obsession with death because of her entrapment within a court she cannot respect. She has no patience with all the military hyperbole and the dominion of men thus she has segregated herself from all the courtly ceremony and custom. The play is claustrophobic as spies are hidden in its many rooms. Scenes of togetherness in one room are followed by those of conspiracy in another, which emphasises human isolation and vulnerability. In other words actions mean consequences. Claudio's conventional lover's exaggeration to Hero indicates his estrangement from his natural desires. The denunciation scene takes place at the altar of a chapel, which exaggerates the huge power of institutions and conventions over the individual, whose emotions it distorts. ...read more.

and is cruelly mocked for his lovesick appearance (A3S2). But Benedick becomes more than just a figure of fun when events in the play lead him to a new maturity and rejection and sacrifice of his former comfortable male comradeship. Believing Beatrice's desperate love and affection, he responds whole heartedly to her desperate unhappiness at Hero's disgrace. His reaction to Beatrice's command to "Kill Claudio" is brave and admirable and his resignation from the prince's service is spoken with manly dignity. It is quite intriguing to identify that no one else has changed which means their mentality hasn't. Through Benedick's and Beatrice's anomalous roles as celibate disdainers of love and marriage, they voice the fear and dislike for the opposite sex so evidently hidden in Claudio and also remind the audience of the element in love occluded by the romantic conventions of Messina. In earthy, bawdy dialogue with Hero on her wedding day and with Benedick after he vowed to challenge Claudio, Margaret adopts a more obscene version of Beatrice's bawdy wit, appropriate to a servant and mistress, less constrained by social conventions than her betters. She speaks for the democracy of shameless and sexual desire "Is not marriage honourable in a beggar?" In the play Shakespeare introduces The Watch. They represent the common people of Messina. ...read more.

The apology fulfilled, the torches are put out and light, indication of dawn and symbol of hope, appears in the sky. "The wolves have preyed", Don Pedro comments, referring to the evil which has destroyed Hero. "And look," he adds, "the gentle day/ Before the wheels of Phoebus, round about/ Dapples the drowsy east with spots of grey". The verse naturalises Claudio's aggression. The daylight signifies his understanding with his darker side. In Much Ado nature maintains a subtle presence in the cycle of day and night, truth and falsehood, goodness and evil and in the sense of the value of time. This implies a necessary link between the rhythms of nature and the process of the human spirit, particularly in love, which establishes a peaceful relationship between man and woman and within the individual between passion and reason. Shakespeare articulates this message very cleverly. But what is so interesting about the play is the philosophy behind it. He shows that humans live lives through experience and only through mistakes and errors, individuals are able to learn from their lessons. Both Benedick and Beatrice notice their mistakes in which they contradict, criticise and amend them, whereas every other character maintains the same level of thinking. No one can be like Benedick and Beatrice, because not every person perceives their own mindset as being false which is why Shakespeare explains, in my opinion, the strongest moral message that "man is a giddy thing, and this is my conclusion. ?? ?? ?? ?? Soreen Hussain ...read more.

This question focuses on the prevalent motif of nature (and human nature) in William Shakespeare's 'Much Ado About Nothing'. There is an exceptional focus displayed in analysing the play and a wide range of linguistic and thematic elements are commented ...

This question focuses on the prevalent motif of nature (and human nature) in William Shakespeare's 'Much Ado About Nothing'. There is an exceptional focus displayed in analysing the play and a wide range of linguistic and thematic elements are commented on. The candidate shows a very good understanding of Shakespeare's use of character and his thematic form to inform a very good answer to the proposed question.

Before the essay has even begun, the candidate makes an excellent observation of the derivation of the title and it's relevance to the context of the play, which can often elude some candidates. This shows evidence of external research and examiners love to see this; it makes essay responses all the more exciting and interesting to read when they are not carbon-copies of other essays that comment on the obvious. There is a very detailed, very clearly structured and very well-expressed answer evident here, suggesting the candidate possesses a full understanding of the play and it's original context. Whilst the analysis explicitly-related to the actual steer of the question is slightly buried at times, there is every indicator that this is not due to a lack of control over the answer; this candidate shows a very sensitive maturity in discussing the foibles of human nature in the play. This analysis of the thematic elements, characterisation and Shakespeare's use of language combines together to make an answer that examiners would be very happy to read, as it ticks all the boxes required for an A* grade answer, with a great awareness of how to handle a sensible response to the question proposed.

The Quality of Written Communication here is excellent. There is an finely adept use of English language, with an enormous variety of complex vocabulary and field-specific lexis required for analysis of the play. The grammatical awareness is an acutely refined mix of long vs. short sentences and a sound understanding of how to use language to shape analytical meaning. There are no spelling errors to comment on, and a large variety of punctuation points are used to help shape the answer. This is good because the excellent expression of this candidate makes there answer very easy to read for examiners.