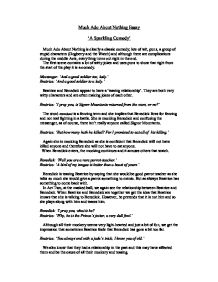 Much AdoAbout Nothing Essay - 'A Sparkling Comedy'

Much Ado About Nothing Essay 'A Sparkling Comedy' Much Ado About Nothing is clearly a classic comedy; lots of wit, puns, a group of stupid characters (Dogberry and the Watch) and although there are complications during the middle Acts, everything turns out right in the end. The first scene contains a lot of witty jokes and uses puns to show that right from the start of the play it is a comedy. Messenger: 'And a good soldier too, lady.' Beatrice: 'And a good soldier to a lady.' Beatrice and Benedick appear to have a 'teasing relationship'. They are both very witty characters and are often making jokes of each other. Beatrice: 'I pray you, is Signor Mountanto returned from the wars, or no?' The word montant is a fencing term and she implies that Benedick lives for fencing and not real fighting in a battle. She is mocking Benedick and confusing the messenger, as of course, there isn't really anyone called Signor Mountanto. Beatrice: 'But how many hath he killed? For I promised to eat all of his killing.' Again she is mocking Benedick as she is confident that Benedick will not have killed anyone and therefore she will not have to eat anyone. When Benedick enters, the mocking continues and it amuses others that watch. Benedick: 'Well you are a rare parrot-teacher.' Beatrice: 'A bird of my tongue is better than a beast of yours.' Benedick is teasing Beatrice by saying that she would be good parrot teacher as she talks so much she would give a parrot something to mimic. ...read more.

The scene in which they deceive Beatrice is also very amusing. Throughout earlier scenes Beatrice has shown that she doesn't think much of Benedick by mocking him, yet she is just as gullible as Benedick and easily deceived. Beatrice: 'And Benedick, love on. I will requite thee, taming my wild heart to thy loving hand.' The change of character in Benedick is also very comical. Just before he is deceived by his friends he has a long speech in which he declares he will never be in love and he will never marry. Benedick: 'One woman is fair, yet I am well; another is wise, yet I am well; another virtuous, yet I am well; but till all graces be in one woman, one woman shall not come in my grace.' Then, after he has been deceived his whole attitude changes. He really believes that Beatrice loves him which in turn convinces him that he is in love with her. Benedick: '...Here comes Beatrice. By this day, she's a fair lady! I do spy some marks of love in her.' What is even more comical is that when Beatrice comes to call Benedick for dinner, he thinks that her words have a double meaning and tries to turn what she says into evidence for her love for him. Benedick: 'Ha! 'Against my will I am sent to bid you come in to dinner'- there's a double meaning in that.' The Elizabethan audience would've enjoyed the comedy in this play a great deal. ...read more.

he thinks it would be a good idea to pretend that she is dead so that people will take pity on her and excuse her of anything she was accused of. Friar: '...She dying, as it must be so maintained , upon the instant that she was accused, shall be lamented, pitied, and excused of every hearer;..' Lastly, I also think that Beatrice's character is slightly sinister at one point in the play. In Act Four, when she and Benedick are alone together Benedick pronounces his love for her and they show much affection for each other. Benedick: '...I protest I love thee.' Beatrice: 'I love you with so much of my heart that none is left to protest.' The scene is very affectionate and we like what is happening between Benedick and Beatrice. Benedick says he will do anything for Beatrice. Benedick: 'Come, bid me do anything for thee.' At this point the love scene is broken by the harsh words that then come from Beatrice's mouth. Beatrice: 'Kill Claudio.' The alliteration of the harsh 'k' sound makes the words even more severe. Also, the sharpness of the words and the fact that the sentence is so short makes them stand out and has a great effect especially in the middle of a love scene. In conclusion, I think much of the play is filled with comical scenes and it is very amusing but we mustn't forget that there are some dark undertones which add great effect and help to make it a play of such wonderful contrasts. ...read more.