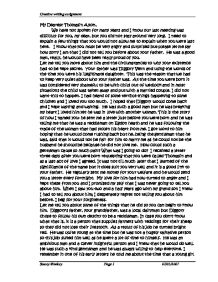 My Dearest Thomasin Alton, We have not spoken for many years and I know our last meeting was difficult for you, my dear, but you did not stay around very long. I need to explain a few things that you would not allow me to explain when you were last here. I know that you must be very angry and surprised but please let me say how sorry I am that I did not tell you before about your father. He was a good man, really, he would have been really proud of you. Let me tell you more about him and the circumstances to why your existence had to be kept secret. Your father was Diggory Venn and using the words of the time you were his illegitimate daughter. This was the reason that we had to keep very quiet about who your father was. At the time you were born it was considered very shameful to be with child out of wedlock and in most situations the child was taken away and put with a married couple. ...read more.

When I saw you two and a half years ago with my grand son I knew I had to tell you about him; I desperately regret not telling you about him before. I beg for your forgiveness. Let me tell you about some of the things that he did so you can begin to know him. Diggory's father, your grandfather, was a local dairyman but Diggory chose to follow his own destiny to be a reddleman. In case you don't know what that is, it is a person that supplies farmers with reddings for their sheep so they did not lose their livestock. As a result of his job he turned bright red. He was quite young at the time but he was not a hugely talkative person so this job suited him well as he spent a lot of time to himself. He was an ambitious man and a clever insightful person and I knew that he would do well. He was such a kind gentleman and he was always willing to help everyone. ...read more.

Diggory went to investigate and found out that they were having a hidden love affair. His letters were always full of interesting gossip; he was quite a good investigator. He would often tell me about the time he proposed to Thomasin but she was Damon's betrothed. He would tell me how he had now dedicated himself to preserving her dignity by forcing Damon to marry her. He also went to see Eustacia revealing to her that he knew of her plans to lure Damon away from her. He was always quite a matchmaker. Any way I am really tired now, I am not as young as I used to be. The last thing I want to say is that your father is not a womanizer (that's what you young ones say, is it not?) He was faithful, he appears to only have loved the one woman and even though he couldn't win her heart he was faithful to her till his last breath. Love you dearly my sweetheart. Give the grandchildren a kiss for me. I hope you can find it in your heart to forgive me soon. Your Loving mother. XXXXX XXX XX X ?? ?? ?? ?? Creative writing assignment Stacey Wookey Page 1 07/05/2007 ...read more.