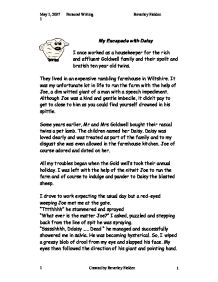 My Escapade with Daisy

My Escapade with Daisy I once worked as a housekeeper for the rich and affluent Goldwell family and their spoilt and bratish ten year old twins. They lived in an expensive rambling farmhouse in Wiltshire. It was my unfortunate lot in life to run the farm with the help of Joe, a dim witted giant of a man with a speech impediment. Although Joe was a kind and gentle imbecile, it didn't pay to get to close to him as you could find yourself drowned in his spittle. Some years earlier, Mr and Mrs Goldwell bought their rascal twins a pet lamb. The children named her Daisy. Daisy was loved dearly and was treated as part of the family and to my disgust she was even allowed in the farmhouse kitchen. Joe of course adored and doted on her. All my troubles began when the Gold well's took their annual holiday. I was left with the help of the nitwit Joe to run the farm and of course to indulge and pander to Daisy the blasted sheep. ...read more.

This seemed to do the trick and we could get on with the real work. Upon my return to work the next day things seemed to go from bad to worse. I was met at the gate by fat ruddy faced breathless man who seemed to have asthma .He announced he was from health and safety. "You can't bury a sheep" he wheezed " it's a health hazard" and his several chins wobbled in agreement. He was followed by a tall skinny, hawked eyed man with a nose the size of Concorde. "You'll have to dig it up" he squawked as he marched towards me. "This is national trust land" and he gestured with a claw like hand. "And I'm the area officer" he gleefully announced as he glared at me with his birdlike beady eyes. So with Joe who was still gurgling and sniffing, and I, feeling exasperated we dug up poor old dead daisy. I was now faced with the problem of what to do with a half decomposed, very wet, very muddy, very putrid and very dead sheep. ...read more.

Before I could make an explanation, the firemen trained the hoses in unison at the cherished nineteenth century farmhouse (with original fixtures and fittings) and turned on the water. It was then that I cried begged and then collapsed. I was utterly devastated. Eventually I managed to explain about Daisy to the Chief Fire Officer and much to the amusement of the on looking firemen. He was very apologetic and explained the neighbours had reported the plumes of black smoke. They had, and not unreasonably, thought the farm was on fire. Did I detect a few sniggers and giggles as they all finally left? The yard was awash with black muddy water. The nineteenth century farmhouse (with irreplaceable fixture and fittings) was ruined. The beloved pet sheep was dead and smouldering on a very damp funeral fire, and poor old Joe has had a nervous breakdown and is now frothing and spitting over the psychiatrist. How the hell was I going to explain all this to the Goldwells and still keep my job? ?? ?? ?? ?? May 1, 2007 Personal Writing Beverley Fielden 1 1 1 Created by Beverley Fielden ...read more.