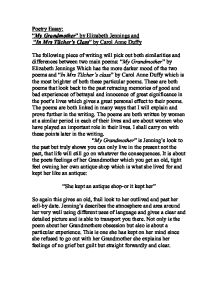 Poetry Essay: "My Grandmother" by Elizabeth Jennings and "In Mrs Tilcher's Class" by Carol Anne Duffy The following piece of writing will pick out both similarities and differences between two main poems: "My Grandmother" by Elizabeth Jennings Which has the more darker mood of the two poems and "In Mrs Tilcher's class" by Carol Anne Duffy which is the most brighter of both these particular poems. These are both poems that look back to the past retracing memories of good and bad experiences of betrayal and innocence of great significance in the poet's lives which gives a great personal effect to their poems. The poems are both linked in many ways that I will explain and prove further in the writing. The poems are both written by women at a similar period in each of their lives and are about women who have played an important role in their lives. I shall carry on with these points later in the writing. "My Grandmother" is Jenning's look to the past but truly shows you can only live in the present not the past, that life will still go on whatever the consequences. It is about the poets feelings of her Grandmother which you get an old, tight feel owning her own antique shop which is what she lived ...read more.

With a happy feel in mind making it last and down in the final two stanzas the stanza length shortens to seven lines this also gives yet again a rushed though sense of discomfort, giving the reader an idea of how uncomfort the poet must of felt. Duffy uses blank verse, therefore it has no obvious rhyme scheme unlike "My Grandmothers" ten syllable pattern. So this time "In Mrs Tilcher's Class" uses its stanzas to bring over the effect of her childhood and adolescence. So, both poets use different types of structure and form to their poem, yet they are so similar in other ways. Both the poets show great imagery in both of their poems whatever methods they use though it is one of the two poem's differences. Just how "My Grandmother" uses simple uses of structure and form it also does the same in imagery though it is very effective. This simple imagery is clear and simple picture and image so you don't have to get your head round the description. Like the "Long narrow room" Jennings describes. So "My Grandmother" is a simple easy to read poem. The poem also involves the smells and sights of the poem and the subjects as I mentioned early such as: "The place smelt old..............the smell of absences............... ...read more.

I have already gone over Duffy's feelings in the poem that she is happy in the first half and angry and feels betrayed in the second. As I have now explained all almost all the differences and similarities within the two poems there is one thing left, the impact of the poems on the reader. The poems are different in the way the reader first feels about the poem. I believe that Jennings in "My Grandmother" is being too harsh and despite her feelings she should have gone out with her Grandmother. Though I believe that the poem is harsh I enjoyed reading the poem as it is perhaps been one of the best descriptions of a particular person I have read. The ways she puts through the ideas and the descriptions are excellent and the way it is put together is also good. "In Mrs Tilcher's Class" is also a great descriptive poem and reminds me of Primary School the things we did and the atmosphere Duffy describes this so well its just how I remember to be. Duffy is intelligent in the ways she brings a cross every aspect of the poem now I understand it exactly it also it a great poem. Duffy is good in the way she describes especially the uncomfort of adolescence. All together they are both detailed poems and are intelligently produced. Thomas Sutton 10HE ...read more.