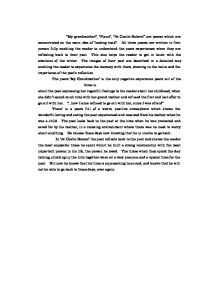 "My grandmother", "Piano", "At Castle Boterel" are poems which are concentrated on the main idea of `looking back". All three poems are written in first person fully enabling the reader to understand the poets experiences when they are reflecting back to their past. This also helps the reader to get in touch with the emotions of the writer. The images of their past are described in a detailed way enabling the reader to experience the memory with them, showing us the value and the importance of the poet's reflection. The poem `My Grandmother' is the only negative experience poem out of the three is . about the poet expressing her regretful feelings to the reader about her childhood, when she didn't spend much time with her grand mother and refused the first and last offer to go out with her. "...how I once refused to go out with her, since I was afraid" `Piano' is a poem full of a warm, positive atmosphere which shows the wonderful loving and caring the poet experienced and received from his mother when he was a child. The poet looks back to the past at the time when he was protected and cared for by his mother, in a relaxing environment where there was no need to worry about anything. He misses those days now knowing that he is unable to go back.. ...read more.

The poet crosses the boundary of present and past, where himself and a "girlish figure benighted" meet. This suggests that this person is the core of his memory and is a very important person for him. It is suggested that they both have a considerate, kind personality and the two "just alighting / To ease the pony's load" furthers the idea of the two being warm hearted and cares for others. The continuous use of "we", "we climbed...we had...we talked" expresses to the reader the inclination of wanting to be with her, to spend time together furthering the idea that this person is the most important one in his memory. The poet uses constant positive phrases like "until hope is dead", "feeling fled". At this moment he is so happy thinking that this happiness with her will be eternal and the thought of misery waiting for him in the future is completely unimaginable for him. The second stanza is very optimistic, "was there ever a time of such quality, since or before, in that hill's story? / Though it has been climbed, foot swift, foot sore, by thousands more". This can be read metaphorically as the hill representing life, and many others like the poet have experienced this situation.. Also it can be seen that sharing time on hill together is sharing life together. ...read more.

But the poet cleverly finishes off with the room being empty and having "only the new dust falling through the air". The new dust falling through the air can represent a new path, a brand new hope for the poet to live a lovely life full of opportunities. This maybe seen metaphorically as the grandmother preparing the path for her, expressing her hidden caring feelings towards the grand daughter and an advise telling her not to make the same mistake as her. I enjoyed the poem `Piano' the most out of the three poems about `looking back'. It was the poem which I thought contained the most positive images, and the way the poet used the piano as a protective figure was very interesting. I know that the piano is a very large instrument which accompanies other instrument in music pieces, which enabled me to see it as a gigantic figure which protected and supported the child all through its childhood, where as the tune it plays could be seen as a voice of encouragement. Also the poem had a rhyme pattern of AABB, a regular rhyme pattern which represents the continuous even flow of musical sound representing the tuneful balance of his childhood. Generally the poem was full of opportunities for me to use my imagination, which enabled me to engage with the text and understand the poem much more better than the other two. ...read more.