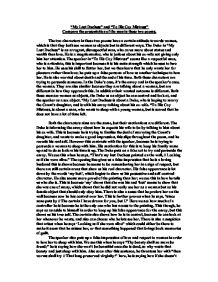 &quot;My Last Duchess&quot; and &quot;To His Coy Mistress&quot; Compare the presentation of the men in these two poems.

"My Last Duchess" and "To His Coy Mistress" Compare the presentation of the men in these two poems. The two characters in these two poems have a certain attitude towards women, which is that they both see women as objects but in different ways. The Duke in "My Last Duchess" is an arrogant, disrespectful man, who cares more about status and wealth then love. He is a megalomaniac, who is jealous about his ex-wife not giving only him her attention. The speaker in "To His Coy Mistress" seems like a respectful man, who is articulate, this is important because it is his main strength which he uses to lure her to him. He uses his skill to flatter her, but we then learn that he only wants her for pleasure rather than love; he puts up a false persona of love as another technique to lure her. He is also worried about death and the end of his time. Both these characters are trying to persuade someone. In the Duke's case, it's the envoy and in the speaker's case, the woman. They are also similar because they are talking about a woman, but are different in how they approach this. In addition their wanted outcome is different. Both these men see women as objects, the Duke as an object he can control and look at, and the speaker as a sex object. "My Last Duchess is about a Duke, who is hoping to marry the Count's daughter, and is with his envoy talking about his ex-wife. ...read more.

This shows that she is just part of his artwork collection, and he is moving on as if in a gallery looking at art. This could also be seen as if his real self has been uncovered, and he is trying to change the subject quickly as to avert the envoy from the painting. It is also another example of control and how much the Duke loves control, by having a sort of 'tribute' towards it. The speaker uses his manipulative technique to persuade the woman, we see this when he says, "This coyness, Lady, were no crime." Here, by calling here 'Lady' we see his false respect for her. It also shows us his is a gentleman and has been well educated. We also see this respect, when he says "And should, if you please, refuse" Here, he is saying how she has the right to reject his offer. The way he says it, shows us that he if asking, and makes it seem to her that he is a real gentleman who cares for her. Also, during the poem, he is basically saying that he will only love her if she sleeps with him, this is shown here, "Two hundred to adore each brest." Here, although he is praising her beauty, he is talking about her sexual features as if saying he will love her more if he can see them. This shows us again how Marvell's interpretations of men are only that they are interested in themselves, and how all they want from a girl is pleasure. ...read more.

Another thing could be the woman's silence throughout the poem; this could be a sign of protest and rejection, as if from the start she already knew what he really wanted. Another way this could be interpreted is to show how women had no say in those times, and how their opinion did not matter. I think that Robert Browning wrote this poem to show us how corrupt his time was. At the time, people were obsessed with order and were living in a particular way. He did not agree with this, and the poem shows us why. The Duke is a character defined by rank, and he uses him to make a criticism about how the world has become too preoccupied with other things, and have forgotten what love is. Also, when Browning wrote this poem, women were expected to follow orders from their husband, and be an object for their convenience, this is what Browning didn't like, he believed that love was the greatest relationship and the best experience, but people had forgotten. Andrew Marvell wrote this poem, to show the world how disrespectful men are to women. In his time, that was what people expected from women, and women, (who didn't seem to have much of a voice) couldn't really argue about it. Marvell wrote this to mock men because they are as vulnerable and fragile as women. Also how women are vital to men, and so should be treated with respect. Both Browning and Marvell point out how sexist the community they lived in was, and engage in a struggle to bring equality and love into the world. ...read more.

Good analysis that is well supported with evidence from the text. Very good on language. When analysing poetry you must also give adequate attention to the analysis of structure and form, including rhythm and rhyme.