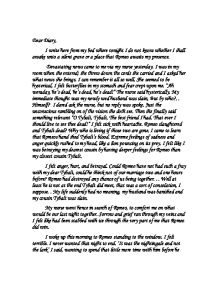 My nurse went hence in search of Romeo, to comfort me on what would be our last night together. Sorrow and grief ran through my veins and I felt like had been stabbed with ice through the very part of me that Romeo did win.

Dear Diary, I write here from my bed where tonight I do not know whether I shall awake unto a silent grave or a place that Romeo awaits my presence. Devastating news came to me via my nurse yesterday. I was in my room when she entered; she threw down the cords she carried and I asked her what news she brings. I can remember it all so well. She seemed to be hysterical, I felt butterflies in my stomach and fear crept upon me. "Ah weraday, he's dead, he's dead, he's dead!" The nurse said hysterically. My immediate thought was my newly wed husband was slain, But by who?. . Himself? I dared ask the nurse, but no reply was spoke. Just the unconscious rambling on of the vision she doth see. Then she finally said something relevant "O Tybalt, Tybalt, The best friend I had. That ever I should live to see thee dead!" I felt sick with heartache. Romeo slaughtered and Tybalt dead? Why who is living if those two are gone. I came to learn that Romeos hand shed Tybalt's blood. Extreme feelings of sadness and anger quickly rushed to my head, like a lion pouncing on its prey. I felt like I was betraying my dearest cousin by having deeper feelings for Romeo than my closest cousin Tybalt. I felt anger, hurt, and betrayal. ...read more.

By this time I was in tears and I couldn't show it was for Romeo. I felt really guilty that Romeo had taken my dearest Tybalt's place in my heart. . . I felt that my lady didn't really care for me either. She told me that if I couldst wash him from his grave with tears, I couldst not make him live, therefore have done. . . I really knew all of this was true, but the thought of Romeo was prevalent. My mother talked of bringing an end to Romeo's life in Mantua. This brought out defiance in me. I would not let that, but I couldn't let my mother know about me and Romeo. I had to be cautious of what I said. I told her that one of the reasons I was upset is because the murderer is from the reach of my own hands. Which was the genuine reason I was grieving, for I could not see Romeo. I simply used Tybalt as an excuse. She was oblivious to this and carried on talking to me. Tybalt seemed to me just another casualty to our hatred. It saddens me to say that, but I feel this could be the last chance I get to let everyone know the truth. My mother then delivered some startling news to me. That I was to marry county Paris at Saint Peters church early Thursday morn. ...read more.

Trembling like crazy, I told the vicar and asked for his advice. I felt dazed and so many emotions were going through my mind, I felt weak. The vicar's solution was a long shot, but at least he didn't turn his back on me like my nurse. The vicar suggested I took a potion, which would make me appear dead, so I wouldn't have to marry Paris, it was to be taken the night before the wedding, and I wasn't sure, but in absolute desperation I took it from him. The vicar also told me to tell my family I was to marry Paris, that I wasn't looking forward to, because I don't like to back on my word, it was purely for Romeo and my love for him. The vicar also went through the plan and telling me what to expect, for example, the shock of waking up in tomb surrounded by dead bodies. My head was full of troubles as I was walking home. As I was telling my father I'm going to marry Paris I felt a feeling of deceitfulness. My father left me shocked when he said he is moving the wedding up to tomorrow instead of Wednesday, the vicar doesn't know this, and so I have to take the potion tonight. So here I am, sitting on my bed, holding in my unsteady hand the key to my future with Romeo. Juliet "Montague". ...read more.