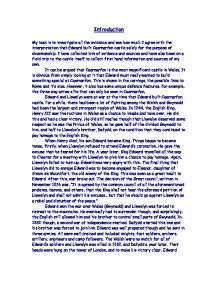 My task is to investigate all the evidence and see how much I agree with the interpretation that Edward built Caernarfon castle solely for the purpose of showmanship.

Introduction My task is to investigate all the evidence and see how much I agree with the interpretation that Edward built Caernarfon castle solely for the purpose of showmanship. I have collected lots of evidence and sources and have also been on a field trip to the castle itself to collect first hand information and sources of my own. It can be argued that Caernarfon is the most magnificent castle in Wales. It is obvious from simply looking at it that Edward must really wanted to build something special at Caernarfon. This is shown in the carvings, the possible links to Rome and it's size. However, it also has some unique defence features, for example, the three way arrow slits that can only be seen in Caernarfon. Edward and Llewelyn were at war at the time that Edward built Caernarfon castle. For a while, there had been a lot of fighting among the Welsh and Gwynedd had been the largest and strongest region of Wales. ...read more.

The decision of the Great council, written in November 1276 was, "It is agreed by the common council of all the aforementioned prelates, barons, and others, that the King shall not hear the aforesaid petition of Llewelyn and shall not admit his excuses... but that he should go against Llewelyn as a rebel and disturber of the peace." Edward won the war over Wales (Gwynedd) and Llewelyn was forced to retreat to the mountains. He eventually had to surrender though, and surprisingly, the English still allowed him and his brother to control small parts of Gwynedd. In 1282 though, a second war of independence started. Dafydd started this one and his brother was forced to join him. Edward was well prepared though and he sent in three armies. All were well-trained and included knights, foot soldiers, archers, artillery, engineers and camp followers. The Welsh were no match for all of Edward's soldiers and Llewelyn was killed in 1282, and Dafydd a year later. ...read more.

But there were also historical reasons for why Edward may have wanted to build his castle there. The castle was built 'around a preserved Norman 'Mottle' and close to the Roman fort of Segontium', says a source written in a CADW booklet. Some Historians believe that Edward was on a great ego trip at the time and was obsessed with total power. He may have wanted to try and give the impression that he was the true heir and successor of both the Norman conquerors and of Imperial Rome. Segontium lay in ruins just under a mile from where Edward was building Caernarfon at the time. Overall, it would have been a great power image for Edward. It is also written in the same source that the fact that Edward built Caernarfon around the Norman 'Mottle', and so close to Segontium, "ostentatiously embodied Edward's claim to be both the successor of the Norman conquerors and the true heir of Imperial Rome". This source backs up my point that Edward wanted to be as powerful as the Norman conquerors and the Emperors of Rome. ...read more.