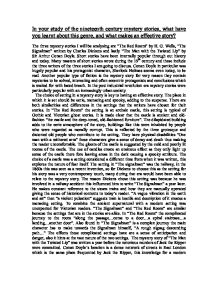 In your study of the nineteenth century mystery stories, what have you learnt about this genre, and what makes an effective story? The three mystery stories I will be analysing are "The Red Room" by H. G. Wells, "The Signalman" written by Charles Dickens and lastly "The Man with the Twisted Lip" by Sir Arthur Conan Doyle. Short stories have been internally popular through out history and today. Many masters of short stories wrote during the 19th century and these include the three writers of the three stories I am going to discuss. Conan Doyle in particular was hugely popular and his protagonist character, Sherlock Holmes seems even today, to be real. Another popular type of fiction is the mystery story for very reason they contain mysteries to be solved, interesting and often eccentric protagonists and conclusions which is waited for with bated breath. In the post industrial revolution era mystery stories were particularly popular with an increasingly urban society. The choice of setting in a mystery story is key to having an effective story. The place in which it is set should be eerie, menacing and spooky, adding to the suspense. There are both similarities and differences in the settings that the writers have chosen for their stories. In "The Red Room" the setting is an archaic castle, this setting is typical of Gothic and Victorian ghost stories. It is made clear that the castle is ancient and old-fashion "the castle and the deep-toned, old-fashioned furniture". The dilapidated building adds to the eerie atmosphere of the story, buildings like this were inhabited by people who were regarded as morally corrupt. This is reflected by the three grotesque and distorted old people who contribute to the setting. They have physical disabilities "One man with a withered arm" these characters give a sense of decay and death thus making the reader uncomfortable. The gloom of the castle is suggested by the cold and poorly lit rooms of the castle. ...read more.

"Violent" hints at hostile creature. The writer is showing simple words placed into phrases make a non threatening setting into a sinister object with an eerie atmosphere. The ghost gives an ominous effect even if it isn't described in great detail its presence is eerie. This related to Victorians as belief in the supernatural was more widespread. Repetition used in both "The Red Room" and "The Man with the Twisted Lip" creates suspense and tension. In "The Red Room" 'this night of all nights' is repeated it makes the audience scared as it is a warning and adds emphasis. In "The signalman" the phrase 'Halloa! Bellow there!' is repeated at the beginning of the story and at the end this is an eerie way to add to the atmosphere. Similes, adjectives and metaphors are also used in "The Man with the Twisted Lip" for example the simile "like the mouth of a cave" sets the scene and gives an image of the opium den, but also gives a sinister atmosphere because caves are dark and filled with unknown danger. The atmosphere is found more in the plot than the setting. Signs of Victorian language are apparent by the use of formal language such as "Vile". Settings are described in a creepy way to induce a mysterious atmosphere "alley lurking behind", the adjective "lurk" makes the alley seem unsettling. The mystery of a story is what keeps the reader reading on, suspense is used and wanting to know what is in the room, if there is a mysterious ghost or who did the crime. Each of the three mystery stories have a sense of mystery or an unknowing quality. "The Red Room" is a story full of suspense and danger. The mystery is what is in the red room. The old people are mysterious because their personalities aren't revealed they add to the mystery by being afraid of the red room. ...read more.

After analysing three mystery stories I have come to a conclusion that they need to have the right elements to create a good mystery story which makes the reader hooked and read with anticipation. A mystery story must have suspense to keep the readers attention and want to read on and know what happens next. The setting is a factor of importance, where it is set should be eerie and have an effect on the audience. It is a backdrop for the characters and the atmosphere created. The setting can generate a scary place such as the old fashioned couch which adjoins to the archaic setting. Atmosphere is created through what a character does or says, also senses like aural the sound of something gives a menacing result. The sight of a shadow disappearing or a candle extinguishing would give the reader a chill enhancing mystery. One of the most important ingredients to a successful mystery story is the language the writer uses it helps create effect through similes, metaphors and personification. These devices paint a picture for the reader and can plant fear into the reader through words. Similes and metaphors help relate an object or person to something else so it is a prominent image in the readers mind. Personification makes inanimate objects move; this is supernatural and there fore ties a fear-provoking theme to the story. The story I prefer of the three would have to be "The Red Room" because it has a timeless attribute and appeals to all eras. It explores the ageless nature of fear itself. It is suspenseful all the way through and reaches a climax at the very end. It then leaves you wondering "why and how" which is an effectual way to end it. The use of grotesque characters contributes to the ominous nature and helps predict danger. The objects found in the foreboding castle are an attribute to the eerie atmosphere that it trying to be created through the creak of doors and shadows which stalk the corners of the corridors. ?? ?? ?? ?? ...read more.