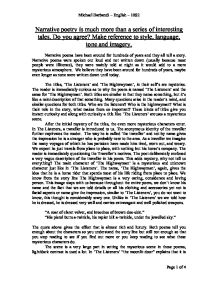 Narrative poetry is much more than a series of interesting tales. Do you agree? Make reference to style, language, tone and imagery.

Narrative poetry is much more than a series of interesting tales. Do you agree? Make reference to style, language, tone and imagery. Narrative poems have been around for hundreds of years and they all tell a story. Narrative poems were spoken out loud and not written down (usually because most people were illiterate), they were mainly told at night as it would add to a more mysterious atmosphere. We believe they have been around for hundreds of years, maybe even longer as none were written down until today. The titles, 'The Listeners' and 'The Highwayman', in their self's are mysteries. The reader is immediately curious as to why the poem is named 'The Listeners' and the same for 'The Highwayman'. Both titles are similar in that they name something, but it's like a mini description of that something. Many questions arise in the reader's mind, and similar questions for both titles. Who are the listeners? Who is the highwayman? What is their role in the story, what makes them so important? These kinds of titles give you instant curiosity and along with curiosity a title like 'The Listeners' arouses a mysterious scene. After the initial mystery of the titles, the even more mysterious characters enter. In The Listeners, a traveller is introduced to us. The anonymous identity of the traveller further captivates the reader. The way he is called 'the traveller' and not by name gives the impression he is a stranger who is probably new to the area. ...read more.

This is because the darkness helps to create an eerie atmosphere. The weather also contributes to the strange atmosphere, as it says, "The wind was a torrent of darkness among the gusty trees". This makes the atmosphere quite unusual in the way it described also because the thought of the wind howling through the trees is a classic horror film scene. Although the weather is not really mentioned are The Listeners the reader tends to presume that it's a dark cold night and from the fact that you are told about the moonlight and from the picture you presume it is a clear sky. Another good way of scene setting is with onomatopoeia as you are not told a sound, you imagine it. Onomatopoeia is only used in 'The Highwayman'. Throughout the whole poem, Alfred Noyes uses onomatopoeia extremely well, such as, "tlot, tlot, tlot tlot". Here the poet is making the sounds of the horse's hooves 'tlotting' along and therefore bringing the poem to life. These help you visualise the hose riding along.Other good examples are 'clattered', whistled', clashed', 'throbed' and 'creaking'. In 'The Highwayman' Alfred Noyes also uses similes to create atmosphere, like, "His face burnt like a brand". Here he is saying that his face is bright red and hot as a brand. Again similes help you imagine what you are reading about, meaning his face. Similes, again, are not used in 'The Listeners'. ...read more.

This again is a typical aspect of any film/story, backing up that narrative poems are full of tradition and morels. Throughout the poem there are gradually unfolding events which add to the tension and the atmosphere. When Bess is tied up and the soldiers wait for the Highwayman, it is spread over six verses and builds up to a climax. The climax in this situation is Bess reaching for the trigger of the gun. "The tip of one finger touched it! The trigger at last was hers!" Weather this was a comedy, Eastenders, a musical or ,as it is, a poem these kinds or lines are assured to give tension and as we all know, the main part to a horror story is tension, will it happen won't it happen all you can do is read on. In the final verses we learn that the ghosts of Bess and the Highwayman still meet in the moonlight, this gives the reader an eerie sensation and a feeling of fright, but also a romantic image in their minds. Again signs of classic tradition showing. Alfred Noyes and Walter De La Mare successfully achieved in creating two mysterious and haunting atmospheres in 'The Highwayman' and 'The Listeners' using some very different and some very similar techniques which gave the poems a good and energetic feel. Proving the fact that yes narrative poetry is more that some interesting tales as they hold feelings and deep concept of real life, but with a twist. ?? ?? ?? ?? Michael Darbandi - English - 10S2 Page 1 of 4 ...read more.